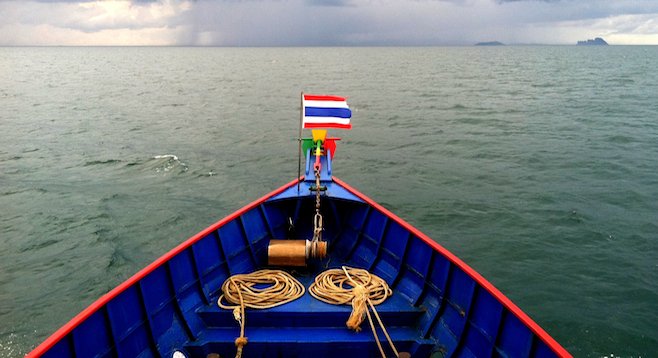 After riding elephants in Krabi, Thailand, it was time to leave that madness behind. So I hopped a ferry for the island of Koh Phi Phi.

Midway though the hour-and-a-half-long ferry trip, ominous clouds could be seen blanketing the island. As we approached, we too were enveloped in the storm. On board the vessel, huddled together under a tiny awning, the other passengers and I attempted to stay dry.

I noticed a German fellow with a case that appeared to contain a guitar. I inquired about its contents, and a ukulele was revealed. He asked if I knew how to play as he handed it to me. I quickly jumped at the opportunity to strum the few chords I knew.

Playing the carefree instrument amongst stormy chaos on the boat was uplifting; the contrasting emotions made for quite a memorable experience.

Shortly after, we arrived at Koh Phi Phi amid the storm. Once on the island, the storm quickly passed, replaced by a new sort of chaos. I was heckled by vendors, as is common in Thailand – not by the usuals selling suits or massages (as you might expect), but by Aussies hawking scuba diving lessons.

Koh Phi Phi is a tiny island that was almost entirely destroyed by the tsunami in December of 2004. It’s a crammed-together pirate metropolis of bars, restaurants, hotels and shops...and a fair amount of garbage, some left over from the tsunami.

There aren't many pirates, but lots of tourists and just as many locals. The locals all have ’50s-era-looking kids' bicycles, and ring their bells or yell “beep beep” as they navigate the tiny people-filled streets.

After exiting the pier I spoke to a man selling scuba diving trips, asking him about accommodations. He recommended his friend Sunny’s place on the beach. He offered to call his friend, and within a couple of minutes Sunny, who turned out to be from Burma, arrived on his bicycle. We proceeded to navigate our way through town on what I thought at the time were side streets. (Turns out all the streets are side streets.)

After working out a place to stay, I hopped in the sea for a swim. Later I beat Sunny at a game of pool to win myself the first of many beers I would drink that day. That night we went down the beach to watch a fire dancing show, which turned into the craziest beach party I've ever seen.

I figured the party might be for a special occasion, or maybe just because it was Saturday night. I asked my new friend what the occasion was. Sunny just laughed and informed me that they do this every night.

After four days in the trash-laden pirate streets of Koh Phi Phi I’d had enough. I decided to make my way to the opposite side of the southern stretch of Thailand, to Koh Phangan. After a quick ferry back to Krabi I would spend a night, then leave in the morning.

The next day I took a six-hour bus, then a two-hour ferry, and arrived in Koh Phangan. I didn’t have an accommodation arranged, but when I got off the boat I was approached by several people with places for rent waiting on the dock.

An older woman who offered nice-looking bungalows on the beach seemed to have the best prices, so I hopped on the back of her scooter and away, off into the sunset, we went.