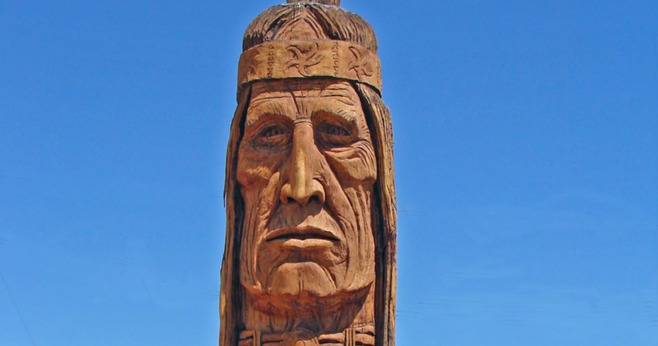 Forty years ago, in 1972, a man spent six months chiseling the face of an Indian into a cliff between Marine Street and Windansea Beach in La Jolla. 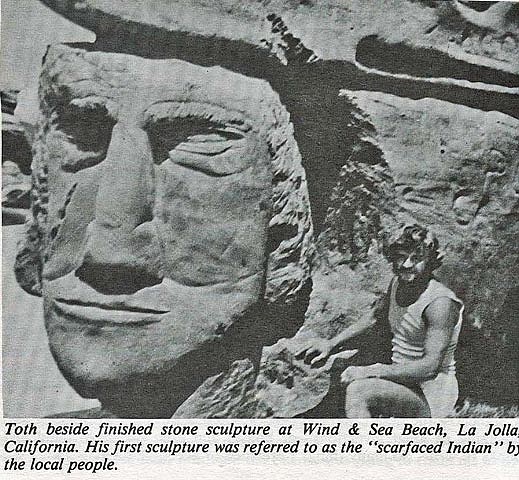 Peter Wolf Toth had just dropped out of college and was traveling around the country when he found himself in La Jolla, where his brother has resided for decades. Seeing a “haunted face” in the stone set him on a lifelong mission to honor legendary Native Americans and the plight of occupied indigenous nations. Today, his Trail of Whispering Giants includes 74 sculptures, all of which he carved by hand.

Although Toth is not Native American, he remembers the Russian liberation of Hungary from Nazi occupation and the horrors inflicted on the ethnic minority tribes during the subsequent occupation by the Red Army.

“My work chronicles the epic struggle of all people facing injustice," said Toth in an interview. "If people miss that point, they miss 90 percent of what my work is all about."

Although his subsequent Giants have been the result of community involvement, he hadn’t sought permission from local authorities for his La Jolla sculpture. When a police officer stopped by and asked him what he was doing, he told him, “I’m releasing a face of a haunted Indian.” According to Toth, the officer didn’t blink, responding as he walked away that he thought the sculpture “looked nice.”

“I’m kind of crazy — not dangerous crazy," said Toth, "but it does help to be a little crazy when you’re an artist.”

According to David Schumaker, an expert on Toth’s work, the La Jolla sculpture is referred to by locals as "Scarface" due to the effects of 40 years of weathering. The sculpture, the only one of the Giants to have been made from stone, is not easy to locate due to the constant reconfiguration of the dunes.

Toth is the author of Indian Giver: Gifts of Statues for All 50 Stated to Honor the Indian, now in its seventh edition. Many of his Giants are catalogued in the Smithsonian Art Inventory.

T'is that. Thanks for reading!

Thank you for your many wonderful and informational pieces about our community. Most of us do not explore enought in the areas that you visit. Keep up your great work and maybe you will continue to inspire us to go visit the places that you write about. Keep safe your travels and warmest regards.

Thanks for reading and commenting, Fad444. Too close to NOT go if you haven't been yet. Just saying.

Roody, Do you know if any of Toth's other sculptures are in this area (Greater San Diego)?

Thanks, JJ. I don't, no. The only other Whispering Giant in state is in Desert Hot Springs (see David's website for the locations http://www.dcschumaker.com/) and when I spoke with Toth he didn't mention any other works from his other collections that were in the vicinity.