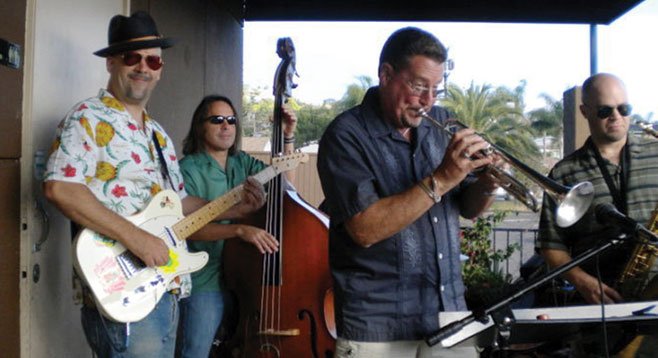 Who’s in the Buddy Blue Reunion Band? All of the original players, says Joe Dyke, aka Sweetlips Mysterioso — with the exception of Blue himself, who died in 2006. “We try to get as many of the original guys as we can.” The list includes Pete Bogel, Todd Hilton, Paul Denton, and Eddie Croft. “And Romy Kaye is coming out for this gig.” Kaye fronted Blue’s band a number of times, recorded with him, and is now a jazz singer in New Orleans.

Blue was a New York transplant who spent his final years in La Mesa. He’d been in the Rockin’ Roulettes, the Jacks, and was a founding member of the Beat Farmers. The Buddy Blue Band came about in 1991, and their specialty was jump jazz. “We’re true to the originals,” says Dyke. “We start with Greasy Jazz,” he says, “and we do a couple from Dipsomania,” both Blue Band albums.

Everybody in Blue’s periphery, it turns out, had a nickname, including Blue’s wife and child. Blue’s real name was Bernard Seigal. Country Dick Montana is said to have been the first to call Seigal “Buddy Blue” as a joke, a nickname that would permeate not only Seigal’s music career but his day job as a music journalist for the San Diego Union-Tribune and the Orange County Weekly.

The request for the first Blue Band reunion came from Pete’s Place, a La Mesa bar that is walking distance from Blue’s former home. Subsequent reunions have been limited to one per year. “We have to answer to Annie [Seigal, Blue’s widow],” says Dyke. “She controls his estate. We’ve had numerous requests to regroup and perform, but aside from this Belly Up show, she’d like us to restrict it to once a year at Pete’s.” Why? Quality control, says Dyke. “She wants to make sure it’s done the way Buddy would have wanted it done.”