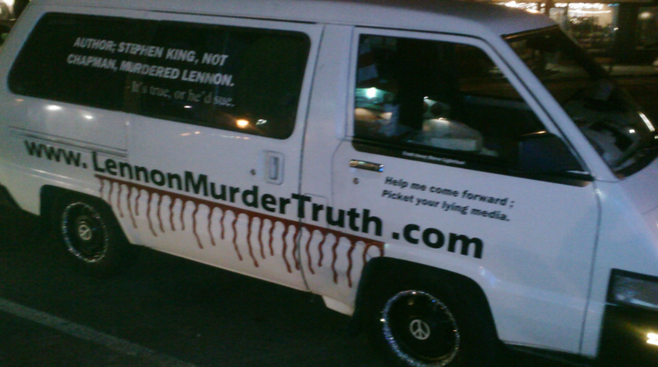 The man behind the Lennon conspiracy van

Stephen King did it?

On Christmas Eve, I stumbled upon this van (pictured) on Newport Avenue, parked on Newport Avenue in Ocean Beach. The website “www.LennonMurderTruth, com” was written loud and clear on both sides of the van; and painted on the windows was, "Author Stephen King, not Chapman, murdered Lennon. It's true, or he'd sue."

My curiosity piqued, I looked up the website. Seems that Steve Lightfoot is the author behind what he believes to be a conspiracy at the highest levels, in that John Lennon was actually murdered by famous horror writer Stephen King, with backing from our government — namely, Richard Nixon and Ronald Reagan.

Lightfoot also believes there was government coding in news magazines — Time and Newsweek — giving hints about, and leading up to, Lennon's murder. There is even a YouTube video where you can see Lightfoot talking about his theory. The website proves him to be articulate and complicated, if a bit obsessed with Lennon's murder.

In an article on the Psychology Today website titled, "Paranoia and the Roots of Conspiracy Theories,” authors Joshua D. Foster and Ilan Shrira claim that  "The rise in anxiety, individualism, and external locus of control may therefore underlie the rise in conspiracy thinking. In addition to the changes in personality, conspiracy theories are also growing more popular because of the mass media, which circulates these ideas to a wider audience and indoctrinates more believers."

On his website, Lightfoot claims to have attended a junior college here in San Diego in the late ’70s.

It doesn't surprise me you saw this guy at OB. He must have been at The Black, super sizing his bong. I looked at his website and all I can say is "Beam me up, Scottie."

Apparently this wack's been at it for a while. Lightfoot results in Heavyhead? The link below is from October, 2000.

OK, WHO remembers David Locke Crane, the magician/wannabe Mayor who rode his Star Trek Tri-motorcycle all over town/OB??????

Now that was a sight!

Pup - I knew Crane from his IB days back in the Eighties. But the real story was his father, also named Loch. Quite influential in San Diego architectural history: http://www.modernsandiego.com/Crane%20Loch.html

But the real story was his father, also named Loch.

I had NEVER, ever, heard of his father or how influential he was- that link was awesome!..... and his father did some incredible work, and to be a student of Frank Lloyd Wright- almost unbelievable. Thanks for that link Dubya, that was truly fascinating. Who would have though David Loch Crane had a superstar architect as a father ....

You're welcome, SP. They're both from the eccentric side of the aisle, with David definitely claiming a bit more territory. A good buddy of mine rented a house in IB on Seacoast Drive some years back. It was the last house on the left side of the slough side. I lived in a pretty cool place directly across the street on the beach side. Crane's place was a two story affair that was pretty nondescript on the outside, but the panoramic view from the inside of the house was phenomenal, overlooking the estuary, the hills of Tijuana, the Pacific, and then the South County mountain peaks. It was the placement of the window panes (and their unique pigment) that made the place a knockout. They were angled inward from the ceiling to the floor and took up two walls of the living room. Topping it all off was the Navy helicopters that flew low over the house during much off the day, as it was in the flight path of the chopper base Ream Field. I met the Dad a couple of times when he came by. Interesting chap, initially.

Typo - the final word in the post above should have read "obviously", rather than "initially". Darn Swype keyboard!

Crane was a student teacher at PL High for a brief time in the early 70's, too.

I have not seen nor heard about him, well since he was pressing charges against Roger Hedgecock for battery sometime ago. I wonder if he is still around???????

I did see that Trekkie trike a few years back, but not lately. Maybe he got beamed up.

He's still around on that Star Trek bike. I see him all the time.

Inside an O'reilly's auto parts store in Seaside, CA, there was a weird guy bothering the salesperson about transmission fluid, first he couldn't find it when he was standing right in front of it, then he couldn't see which one was Dexron, again right on the bottle... I KNEW there was something off about him.

Then I saw that weirdo nutjob's van in the parking lot when I left. Looked it up on the net... here I am...

I only came across Lightfoot's publication via Reddit today and TBH I suspect the author is suffering some form of dissociative identity disorder. Don't get me wrong...I believe historical conspiracies exist like JFK's murder and the 9/11 terrorist attack, but this is just sad. His cut and paste of news headlines from various newspapers actually reminds me of the "illness" the character, John Nash, was portrayed as suffering in the film, "A Beautiful Mind." I can only pray Lightfoot obtains the professional help he needs to banish these demons of paranoia and delusion as such "conspiracy theories" as his undermines and tarnishes those genuine whistleblowers of real conspiracies going on around us today.

Cut Lightfoot some slack. John Forbes Nash Jr. was an American mathematician who made fundamental contributions to game theory, differential geometry, and the study of partial differential equations. Nash's work has provided insight into the factors that govern chance and decision-making inside complex systems found in everyday life.

What if Lightfoot is right and you are wrong.