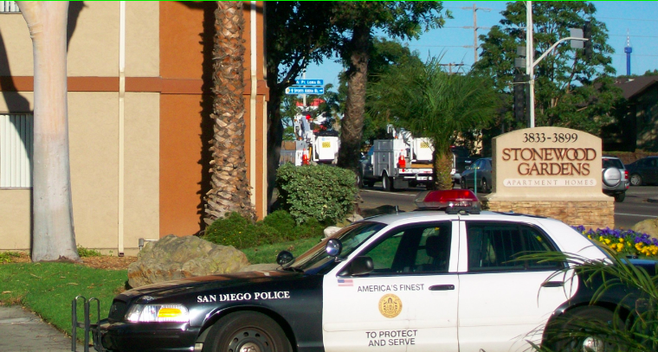 San Diego police descended on the Stonewoood Gardens apartments, located on the 3800 block of Midway Drive (where it intersects with Sports Arena Boulevard), early on the morning of Wednesday, December 19.

Four police cars flanked the driveway of the apartments right next to the McDonald's restaurant, and a female suspect was sitting on a large rock, her hands shackled behind her.

When I exited my car to go into the McDonald's, the heavily tattooed woman called over to me and whispered a request to help her “get out of these goddamned handcuffs." Since I did not want to aid and abet, I changed the subject and asked the lady what was going on.

She told me that she had gone to the apartment complex at 8:00 a.m. to give her sister “some Bieber tickets." I asked her if the tickets were "stolen or hot.” She said no, but that an altercation had taken place with some of her sister’s neighbors. I told her to "just chill out” and if she had done nothing wrong, the cops would cut her loose.

Later, I phoned the Stonewood Gardens management office and asked Erica what all the commotion was about. She told me that since their onsite office does not open until 9:00 a.m., they were not aware of any police activity that had taken place earlier in the morning.