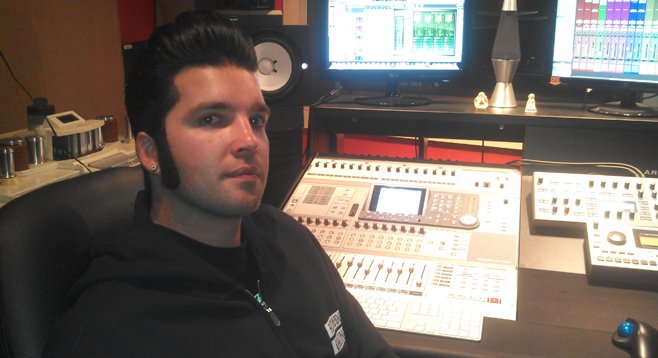 We buy a lot of bulbs

“I realized that booking and promoting shows was a risky business to be in, and it wasn’t a sufficient way to make a living,” says Sulo King, whose career in concert promotion included a trouble-plagued run in San Marcos that began in early 2005. The Jumping Turtle incurred several well-publicized legal snafus, some involving Sulo’s attempts to stage all-ages events where alcohol was also served to adults.

“I started off by working at Canes Bar & Grill as a security guard and working my way up to being the head talent buyer and booking agent for Brick by Brick, where I worked for eight years,” says King. “I ended up getting laid off in 2010, unfortunately.”

After taking a job at Unique Pawn Brokers, “I decided to either open up a recording studio or buy an existing one. I realized this while hanging out with my friend and now business partner Frank Torres.” Last summer, the duo responded to a Craigslist ad placed by Mario Quintero at Black Box Studio, opened in November 2005 just off 25th Street in Golden Hill.

King (who studied recording arts at MiraCosta College in Oceanside) and Torres (with a B.A. in audio production) made a deal to acquire the 2900-square-foot facility, renamed Iacon Sound as of October 1. “The location was great, and we loved the fact that his recording studio was the ideal size we were looking for. Black Box also had six rehearsal studios that were rented out by bands on a monthly basis, which was also a huge incentive.”

Since taking over operations, Iacon has remodeled and hosted recording sessions with the Roman Watchdogs and Colorado transplant (and America’s Got Talent contestant) Gabriel DeCrocker.

The building has also been home to concerts featuring bands such as Goblin Cock, the Advantage, Ilya, Transfer, Japanese Sunday, Vitro, Jezebel, Danny and the Tramp, and Quintero’s group Hialeah. The interactivity with bands, King feels, may enable him to revisit his previous occupation as a show promoter. “I would like to return to it again under our studio’s name,” he says.

Meanwhile, King’s finding plenty of minutiae to keep him busy at Iacon. “We buy a lot of light bulbs. There are no windows in the studio, so we always need proper lighting.”

Good God man! I forgot all about that room. I did something there years ago and remembered it to be a very vibey, cool hang and we got good sounds in there. Congrats Sulo!