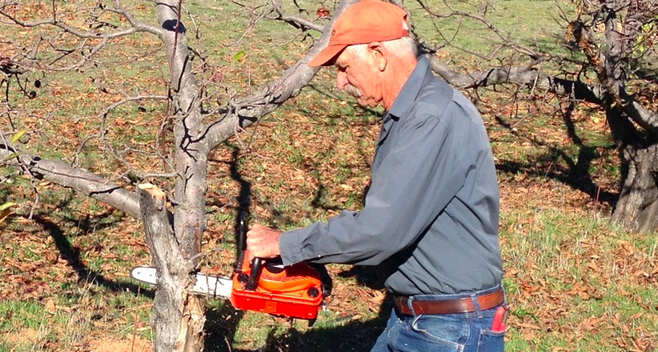 The December 8 meeting at the Peacefield Orchard on Wynola Road was described by the Julian Apple Growers Association as a lesson in pruning trees. About 30 people showed up.

Ray Meyer, acknowledged as the dean of Julian fruit-tree cultivators, started the class by showing his 12-inch Echo chainsaw — “easier to hold and control,” he said. Meyer showed us how to start cutting on the underside of a branch. He began with an old tree that had a 12-inch-diameter trunk and some large dead branches.

There seemed to be a number of old trees at Peacefield, which opens up as a “u-pick-’em” in the fall. Peacefield sits in the oldest section of Julian apple fields, in the Wynola area. Around the corner on Highway 78 are the landmark Calico Ranch and the fruit stand still selling apples on weekends in December.

My friend, who moved from Carlsbad to Julian ten years ago and has become a Julian history enthusiast, told me after the class that these Wynola orchards were low enough that they didn’t require irrigation. “Those who live in these fields have trouble with septic tanks since the water table is only three feet down.”

Meyer said you want to get the thicker dead branches first, then the downward-hanging branches, which won’t be able to carry the apples’ weight; then the "shooters," pencil-width branches growing straight up.

We examined the dead branches. “Sunburn,” said Meyer. Another orchard worker told us you can sometimes save a dying branch by spreading cow manure on the damaged branch. “But it has to be really fresh manure.”

The buzz in the town of Julian this fall has been the importation of apples from Washington and Idaho to supplement a local crop hurt by late frost and ground squirrels.

Squirrels took over part of the chit-chat among the students at the class. A lady said her husband has kept the squirrels away from the fruit with upside-down wire cones put around the trunk.

Another dictum was repeated among the class attendees: “You can’t make money on apples in Julian, you can only spend it.”

One of the longtime locals who is replanting an old orchard recently went to a San Diego County Farm Bureau class in Escondido on agrotourism. The number of orchards open to tourists who want to pick their own fruit seems to have grown, including Peacefield and another one at the end of Farmer Road.

The longtime local was discouraged by the cost of insurance you need to allow city folk on your property. He said the best hope for agrotourism was to plant a vineyard and open a tasting room. The Escondido class was full of guys from Ramona who have planted grapes, he said.

Nicely done, Carlos. Seems like gold and apples are Julian's claim to fame. My folks landed there just after the Civil War.

Don't miss the Museum on a trip up there sometime. It's on the right, just as you are about to enter town. You can park up the hill behind the old schoolhouse which is now the library.

Let's hope our apple farmers get some good rainfall soon!