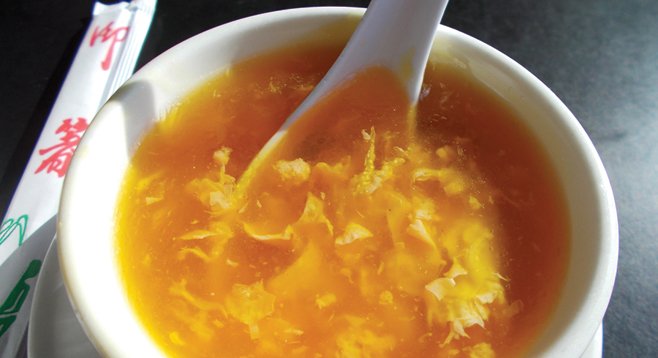 Carla gives me that look, like, Has Diane totally wrecked my hairdo? Tell me!

’Course, I never would, not in a thousand years, not if I wanted to live.

“Don’t lie to me, Bedford. She’s made me look like a hurricane victim, right? Right!?”

Man, she nailed it.

I look around, desperate for a distraction.

We’re at the corner of Orange and B, in Coronado. It’s a building with thick-walled arches, Spanish-style. Lots of potted trees and flowers outside.

’Course, now this place is Bistro d’Asia. And not the cheapest. The menu on the wall by the door shows items like Open Sesame Chicken ($13.95) and Dancing Scallops ($18.95).

“Still,” I say, “they’re bound to have lunch specials.”

I lead the way under the arch of the corner door.

“Welcome,” says this gal at the reception desk. “For two?”

“Do you have any, like, lunch specials?” I ask.

“How many choices are there?” 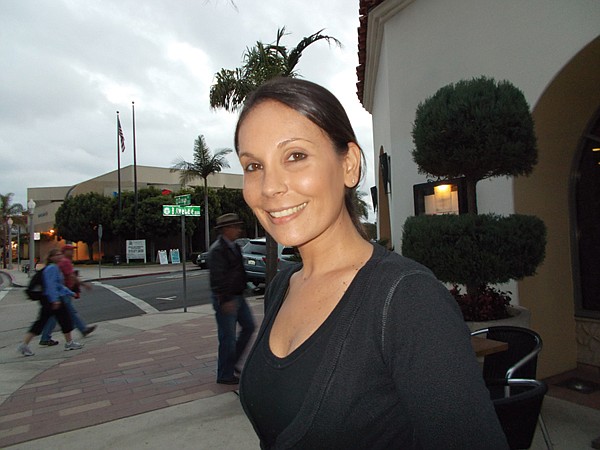 Well, now. Paydirt. That doesn’t sound bad at all.

She leads us to a window seat, where we can catch winter sunbeams. The decor is woody, dark carpet, black tabletops, but with sky-blue walls, lots of mirrors, and purple-ish chairs.

“Guess who sat in this very spot?” Carla asks.

“Marilyn Monroe and Errol Flynn. I never saw them, but my parents talked about it. These very seats! They’d come here from the Hotel Del. For lunch.”

“And that’s not all. Every time we’d sit down, my dad would say, ‘Guess who stood outside right there on the sidewalk, recruiting pilots for the Flying Tigers,? Chiang Kai-shek, the generalissimo who ruled China.’ I’d look out the window, hoping to see him. I wanted to know what a Chinese generalissimo looked like.”

Carla’s all amped up now. “And Mom would tell us to have the Jack Salad because it was originally made by Jack Clapp, the maître-d’. He helped develop the Caesar salad down at Caesar’s in Tijuana…”

This is when Mariana appears to take our order. We’re talking Asian food now, of course. For the past 11 years, Mariana says.

First up, I get a pot of Chinese tea. Carla gets a pink lemonade. It’s included in the deal.

She orders the hot-and-sour soup, and I go for the velvet egg-drop soup. She has a coleslaw appetizer salad. Me, I get the Caesar, though it’s probably not Jack Clapp’s no mo’. She decides on the Saigon kung pao chicken, while I ask for Firecracker Shrimp, only because I see one go by, sizzling on a black iron plate.

In our never-ending competition over who orders the best stuff, Carla wins round one. Her hot-and-sour is really good, dark and tangy. Mine’s, well, egg soup. Fine when you add some soy to it, but no contest. She wins on the salad front, too. That coleslaw has crispy wontons and a “secret” peanutty sauce with a vinegary tang. Real refreshing, the one bite I’m able to sneak. 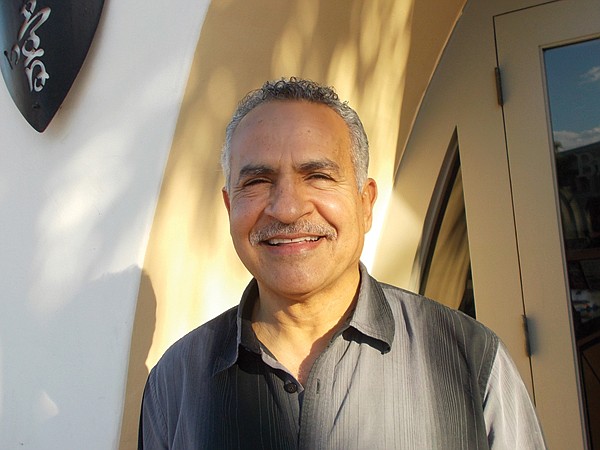 “And guess who painted murals all around these walls when it was La Avenida?” Carla says.

“Close,” Carla says. “It was Rivera’s teacher, Ramos Martínez. He taught at the National Art Academy in Mexico City. It was started in 1785 — can you believe it? The murals he painted here were some of his greatest works.”

Did I mention? Carla knows art. Pretty dab hand with the brush herself.

Mariana brings the main plates. Dang! Carla wins again. The lunch-special-size Firecracker Shrimp doesn’t come on the sizzling plate. Just a regular one, with sautéed onions and green peppers and red-pepper sauce. Amazing how childish you get when you’re eating out, but I wanted to see the sizzle.

They taste great, though, chili-hot. You need the ball of rice they give you. And the red-pepper sauce is great.

But Carla’s kung pao, man... Chicken, peanuts, veggies, chili peppers, garlic, onion, green peppers. Shake a bit of soy on it, and you’ve got yourself a wicked meal.

“What is this?” I ask Carla while I’m borrowing a chopstick-full from her plate. “Cantonese-style?”

“No way,” she says. She knows quite a bit about Asian food, too. “Schezuan. They’re the ones who like their food hot. ‘Kung pao’ means ‘palatial guardian.’” 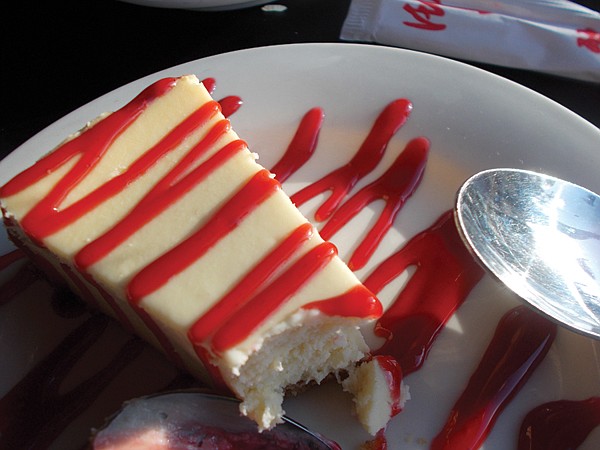 Neighbor’s cheesecake: we’re having this next time!

“Well. Palatial guardian chicken. I’m impressed,” I say. And I am.

The owner comes up to see how we’re doing. Alaaeldin Elsadek. Turns out he’s Egyptian-American. “I had a partner from Hong Kong when we first opened,” he says. “We parted ways, but I kept with the Asian food.”

Alaaeldin was a champion soccer player. “The only reason I didn’t play for Chelsea, in the English League, was I came from Egypt. Back then, you had to be English or from the British Commonwealth. Now, it wouldn’t matter.”

Carla and I come outta here $25.33 poorer, including tax. About $13 each, for everything. Not a bad deal, and plenty good. And, hey, sitting where Marilyn and Errol sat? Priceless.

“So, the La Avenida murals?” I ask. “What happened to them, if they were so important?”

Her family’s been here since Mexican days. Touchy subject, still. I don’t argue.

Would like to confirm it's a great place to go in Coronado, delicious, and that the lunch menu is a great offer..

Partial here to the Pad Thai, which is hearty and with chicken and shrimp; also the Moo Gu Gai Pan which is a lighter meal with sweet pea pods and traditionally delicious chicken.

And then there's the large menu...!

Mariana is very pleasant, isn't she, from Brazil. She does not however have a palm tree as part of her hairdo -- at least on normal days ;)

The restored mural is very nice to appreciate, as many things, at the Coronado Library.

Great to have Carla present in the experience, and for all her talented stories.

Yes, didn't spot the danged tree till too late. Good catch! Though it does look like a kinda Hawaiian hairpiece. That mural has to be a national (¿international?) treasure. And you're right. Without Carla I wouldn't have known about half this stuff. You can see: I married Up...