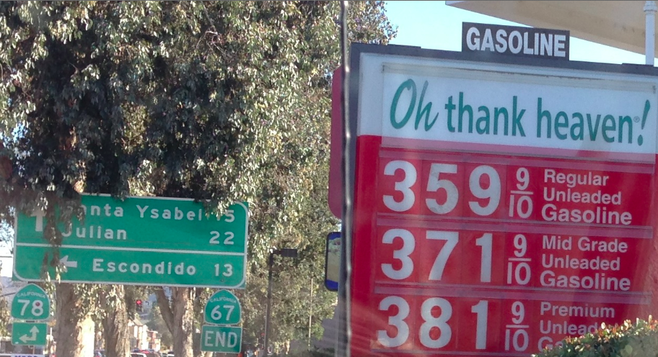 Ramona’s main street, named Main Street, is where Highway 67 from the south merges into SR-78 coming in from Oceanside on the way to Julian and the desert. The eucalyptus on the west end of downtown Ramona might remind you of French roads with poplars.

But another distinction is Main Street gives you a chance to shop gas prices. The following gas stations — all on the right-hand side as you drive east (except the Arco) — were selling gas mostly under the San Diego County average on Saturday, December 8.

These are prices you would expect in Kearny Mesa or south San Diego. Not in a rural area of the county.

According to UT-San Diego, the average cost for a gallon of gas in the county cost $3.68 on Monday, December 10. That is “down 20 cents from a month ago, according to the AAA’s daily fuel report.”

Diesel is often cheaper in Ramona too, but on my last trip it was 10-20 cents higher than the Mobil on Camino del Rio South just east of Mission Gorge Road and north of I-8 ( 32.7802,-117.102495 ). Gas is often cheaper there too. Beats the hell out of Quick Trip in El Cajon where the "service" varies from rude to surly. I am boycotting them. No bathroom either. At least the cheap place in Ramona (Valero?) has a bathroom.