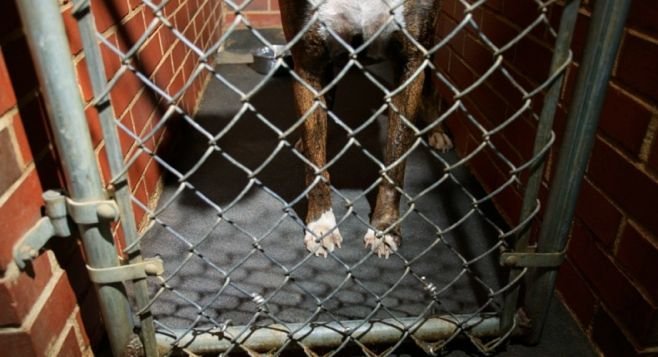 Help for a caged dog?

Heymatt: How can some people be so cruel? My neighbors got a pitbull puppy and have caged it in a tiny space with six-foot plywood walls so nobody can see in and the dog can’t see out. She cries and yelps all day, but nobody ever does anything. I believe they are raising it to fight or be bait for fighting dogs, and it breaks my heart. I’ve called the Pitbull Society and Animal Control many times, but nobody ever returns my calls. My veterinarian says that as long as the dog has food, water, and shelter the owners can do whatever they want with her. Is there anything I can do in this situation? — Roy, National City

I’ve always been under the impression that individual cases of animal abuse (like the one you refer to) are harder to do anything about than more “institutional” cases (like factory farming and puppy mills). However, according to the Animal Legal Defense Fund, hundreds of individual offenders go through the system every day under animal-cruelty laws. Statute 597t from the California penal code regards the confinement of animals and states that it’s unlawful to keep an animal without sufficient exercise. If the situation is as you describe it, the owners could be in violation.

Of course, I don’t know the exact specifics here, so I can’t give you legal advice or anything, but I can advise persistence! You could check with San Diego County Animal Services and see if there is a report on file for the case you’re talking about. I’m assuming that’s who you complained to originally. They’re the only ones with any real law enforcement powers. If they have a report on file, then you have somewhere to go. If you feel the issue isn’t resolved, pressure them to go back out. Getting a person on the phone who can give you the answers you need is important. Rather than waiting for someone to call you, be active and pursue your own goals. That goes for just about everything in life, when you get right down to it.

I think you need to contact the police & keep trying animal control. What they are doing sounds inhumane & why have a dog if they are going to treat it like that. Dog fighting is an extremely horrible form of cruelty & it is illegal in all 50 states. There must be some Pit Bull rescues near you, I would contact them as well. I would start with the police though. If these people are involved in dog fighting in any way they need to be stopped. Good luck & I hope you are able to help this baby.

Take the DOG, these ass clowns don't deserve a dog and no dog should endure what you describe....