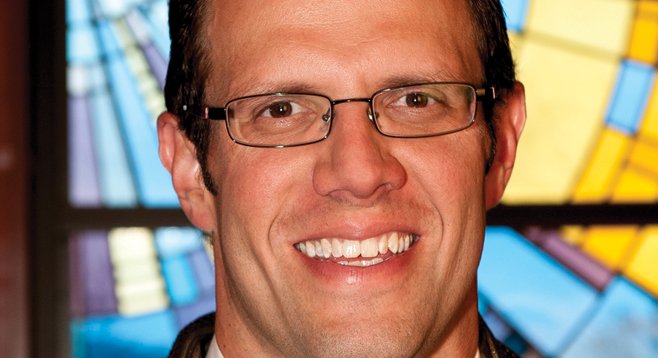 San Diego Reader: What is your main concern as a member of the clergy?

Rabbi Josh Burrows: On the one hand, what concerns me is what do my congregants need, what are they going through, and what can I do to help them to think about their lives and celebrate the good times and face the tribulations all right. On the other hand, as rabbis we’re also tasked with the job of teaching, inspiring, motivating, and challenging. In addition, we Generation X clergy have got to figure out — about 20–30 years from now — how to transition the Holocaust as an historical event from recent history to ancient history. It’s going to be toward the latter part of our careers that the Holocaust is going to be approaching its 100-year anniversary. How will we mark the Holocaust without any survivors of the Holocaust around to share their stories?

SDR: Why did you become a rabbi?

RB: As a kid growing up, I wanted to be a teacher, a writer, a counselor, and work with kids, adults, and the elderly…. I couldn’t choose any one of them individually, so I chose all of them — and that’s how I became a rabbi. It was not about God for me, even though I’m a faithful person, and it was not about a calling for me the same way as it was for my colleagues, who I greatly respect, but it was about how do I know myself and put myself in the position where I can make the biggest difference in this world.

RB: We don’t really have a clear answer in the Jewish tradition. We give a number of possible different answers, but my personal view is that I have no idea. Until I go there, I won’t really be able to say…. I don’t really know, nor do I want to think about it too much. Rather, I’d like to focus on how I can make each day as worthwhile as I can make it…. I need to take the 15 hours in a day that I get to be awake and make the best out of it.

SDR: What is your blessing for the New Year?

RB: How do you not say “world peace”? — especially right now? As corny and hack as it sounds, I’d much rather come up with something more creative, but I can’t think of anything more pertinent. With the amount of incredible violence that is playing out in places like Syria and Israel, and all the things going on in Africa, especially the Congo and Rwanda, I can only think world peace, for heaven’s sake.

I am Rabbi Josh Burrows, who was profiled in the above piece. Thanks so much for the opportunity, it's an honor to be profiled here! Just one correction: the name of my Jewish denomination is "Reform Judaism", not "Reformed Judaism". This happens to be a pet peeve of mine -- I most definitely did not say "Reformed Judaism".

Anyway, thanks again for the opportunity! Hope everyone enjoys this piece!