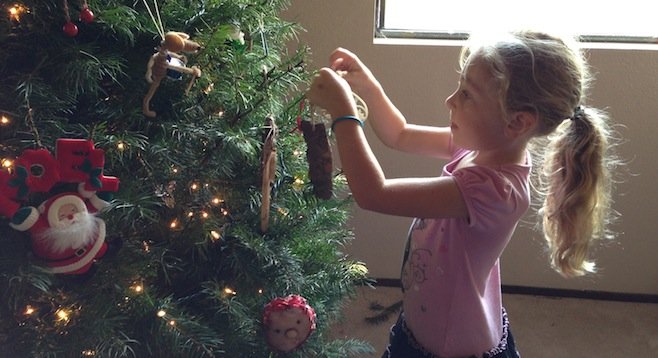 My nephew Brian greeted us just inside the door to my mother’s house. On his head was a fuzzy Santa hat, and in his hands he held a black plastic camera. “Say, ‘Cheese,’” he said through an adorable smile. I flashed my teeth and leaned in close, thinking to bring him in for a hug after he played picture-time or whatever, but once my face was a few inches from the “camera,” a cold stream of water gushed from the fake lens and onto my face.

“Oh, come on,” I said, trying not to smear my lipstick as I patted my nose and lips dry. “Okay, fine. You got me. But I’m going to get you back.” And I did — about an hour later, when I lifted him under my arm like a handbag, carried him to the kitchen sink, and turned the faucet on his head as he laughed and squirmed. But for now, revenge could wait, as I had other matters to attend to; namely, the delivery of gifts. 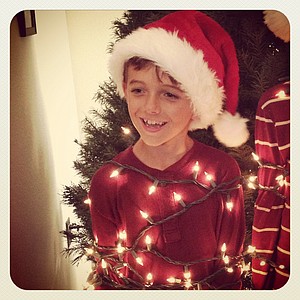 The gifts David and I came bearing were not Christmas gifts. I assumed that, by now, my sisters had come up with some kind of story to explain why Aunt Barb and Uncle David were never seen on Christmas day. The actual reason is boring — my man and I prefer to do our own thing: we start with champagne and then move on to whatever we feel like doing for a day while the rest of the world is busy. We also have a “no gift” rule. No religion, no obligation, no stress, no email or phone calls to contend with; it’s a wonderful day.

And, anyway, it was only the first of December. The reason for the gifts was we’d just gotten home from visiting with David’s parents on Martha’s Vineyard, and every time we’re on the island we hit up two stores known for their fun gifts (Rainy Day in Vineyard Haven and Alley’s General Store in West Tisbury) and select a few things to bring back to our niephlings. I like to give the kids presents outside the traditional gift-giving occasions — mostly because I don’t want to compete with other gift-givers for the recipient’s acknowledgement and appreciation.

It just so happened that the day we were able to deliver our bag of goodies, the family was gathered at Mom’s to decorate her Christmas tree. Each year, my sister Heather and her husband Sean help Mom pick out a tree, and then they haul it home and make it vertical in her living room. Once the pine is in place, my mother chooses a seat on the sofa that gives her the best full-tree vantage point, and it is from there that she directs the decorating like a New York Italian Tarantino.

When David and I arrived, the tree was already standing, but the evidence showed it had just gone up — pine needles littered the carpet and the boxes of ornaments had yet to be opened. Sean took care of the lights — all white, to match the white lace bows (which go on last) that my crafty mother made the year she decided to forego the red-and-white checked bows and colored lights of my early childhood for a more “Victorian” look.

My brother-in-law Simon was there with Bella and Olivia. Before the kids broke into the boxes, I had them gather ’round so I could explain each bestowal. “These rocks are actually geodes — you use a sock to bash them open to find the crystals inside. But wait for your dad to help. When you put together the puzzle pieces from this ‘floating bottle,’ it’ll form a treasure map. This...I don’t know what this is, some kind of pirate game. Liam, you’re the oldest, figure it out and explain it to the others, will you? Brian, you and Bella are in charge of the fake tattoos.”

Heather ensured that each child thanked us properly, and I reveled in the gratitude, but only for a few minutes, because now it was tree time. An eight-foot-tall tree has never been dressed so quickly. The children formed an ornament brigade, advancing on the tree with the determination of Patton’s Army. 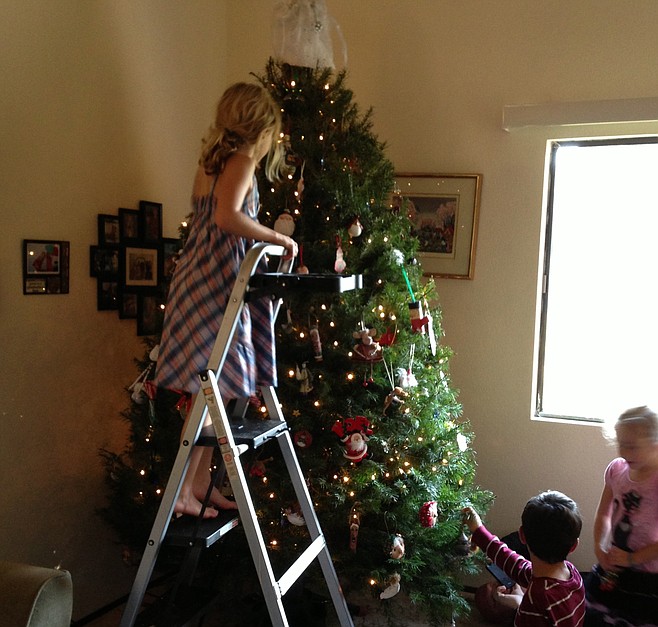 The kids descend upon the tree

I sat on the couch beside Heather and Mom. “It’s so much more fun when we don’t have to be the ones taking direction,” I said to Heather. She smiled and nodded. I wondered if my niephlings would ever reach the same point of irritation we did with the whole tree-decorating thing; if they would ever snap at their Nana, You think it needs to be a little higher and to the right? Then put it on yourself. I cringed at the memory of what petulant little bitches my sisters and I had been at times.

Ornaments flashed by like memories. The weird nylon granny heads Mom sewed had long since lost their little wire glasses. There were the driftwood pieces painted to look like freakish elves — Mom bought a new one (or two) every year from the holiday craft fair in Coronado. The nutcracker soldier made of construction paper that Jenny created in kindergarten — how had that survived?

“You got me this one,” Mom said, holding up a Patience Brewster “Six Geese a-Laying” sculpture, complete with white, downy feathers. “And this.” Mom handed me a glass hummingbird.

“I have damn good taste in ornaments,” I said. “That reminds me, I have something for you, too.” I returned to the bag of gifts and retrieved a blob of bubble wrap, from which I unearthed a glass dome containing a red glittery cardinal and little balls of snow.

“It’s not a chicken,” Mom said, showing her disappointment.

“You have enough chickens,” I snapped. “It’s time to branch out into other birds.”

“Hey, Brian,” I said. “Where did you put that camera? I think your Nana wants you to take her picture.”

my man and I prefer to do our own thing: we start with champagne and then move on to whatever we feel like doing for a day while the rest of the world is busy. We also have a “no gift” rule. No religion, no obligation, no stress, no email or phone calls to contend with; it’s a wonderful day.

How did you begin and How do you enforce that? I have been desperately trying to set up a "no gift" rule for a number of years without success. I don't know how to shop for several friends who are contenders to be subjects on the "Hoarders" TV series.

We host an open house on Christmas day (You and David are invited if it fits in your busy schedule) and I wish that were gift enough.

It was tricky at first, but with consistency, it has worked (going on 4 years!). I explain to my family and friends (and repeat myself each year) that there is nothing I need or want, that I'm not getting anything for anyone, including David, so if they want to make me happy, please save time and money that is hard enough to come by during the holidays (I also mention that if they want to get me something for the sole reason that they want to get me something, do so at some fun unexpected time of the year, when the gift is not laden with social obligations).

Thank you so much for the invitation! But we're going to stick to our new tradition of having a quiet day, just the two of us. :)

Bravo to you! I too have tried to start a "no gift" policy. It's my S.O. who refuses to get on board (he equates gift giving to affection). SIGH! I'd rather he give to "Feed America" in my name (or any other worthwhile organizations). The rest of our families have moved away and we only give if we see them on Christmas, and only then do we draw names, secret Santa style, since we both come from large families.

When anyone equates anything with affection, that's a tough situation. At least it's a positive thing like gifts and not (as in the case of some unfortunate people I know) not a negative thing like yelling. I had one friend who thought her boyfriend didn't care about her because he'd "never fight back." I do admit I love to see shiny wrapping paper. Happy Holidays!

It's my S.O. who refuses to get on board (he equates gift giving to affection).

This is a dilemma I face as well.

I must confess Barbarella, I applaud your RSVP in decline of my invitation. It perfectly instructs me on how to proceed with my own task, which is the best gift.

You've inspired me to write a column about this topic - the power of 'No.' It's not a bad word, you know, quite the contrary, and I'll explain why with examples. Thank you! :)