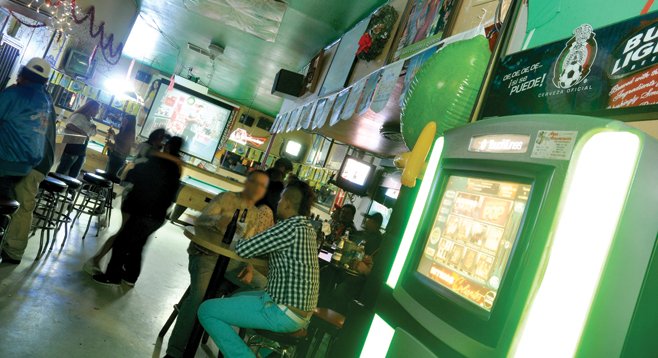 Behind the vinyl curtain at El Uno Bar

There has been a lot of media buzz about Tijuana lately. With homicide rates dropping starkly from what they were a few years ago, the city has been reestablishing its nightlife along the renowned Calle Sexta, catering to throngs of local youth in lieu of tourism. The result is a thriving art, music, and bar scene that gives San Diego’s heppest hangouts a run for their money.

If you’re not ready to make the leap across the border, get your feet wet at El Uno Bar on University, just east of the 805. This bar actually sketches me out way more than anywhere I’ve been in Tijuana.

Never have a pair of laminated Chargers curtains felt so foreboding as those that separate the volatile cosmos of El Uno Bar from the outside world. Once you go in, there is no turning back. There are things you will see that you cannot unsee. Seriously, just go to TJ.

For starters, the bar offers nothing on tap, overpriced tequila that is always the last shot in the bottle, and cans of Tecate for a brazen $3.75 a pop. The menu operates on a haphazard pricing structure that once resulted in a bill of something like $9.67 for a couple of beers and a shot, so I suppose that could work in your favor if you’re in the mood for barter (Spanish only, güero).

On the bright side, I recently got a bottle of Victoria that was so cold, I thought I’d gotten a bunch of pulp in with the lime, but then realized it was simply frozen. The traditional salt took on a whole new meaning as I shoveled it into my beer, slowly melting the ice until the beer dislodged itself from the bottle.

Speaking of ice, the bathrooms offer a chance to enjoy the near-obsolete sport of ice-cube pissing in the urinal troughs.

The usual clientele is a grim assortment of vaqueros and transvestites — which really is the best crowd for karaoke Wednesdays.

El Uno is a welcoming venue once you get past your own inhibitions (though one Google reviewer asserts that their phone was stolen here — by the bartender!).

Cash only
The Deal: Bucket of beer for $14
Hours: morning till late