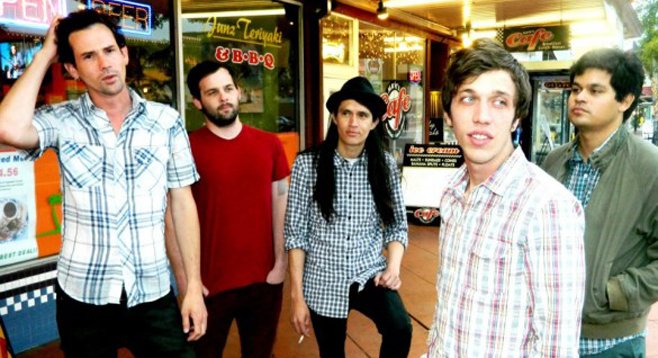 Indie-soul outfit Hills Like Elephants have made a quick climb to the limelight since their debut album, The Endless Charade, dropped in February 2012.

Playing a danceable crossover of indie rock, lo-fi disco, and what singer/keyboardist Sean Davenport calls “Motown with drum machines,” Hills Like Elephants were crowned Best New Artist at the 2012 San Diego Music Awards, scored several favorable local and blogland reviews, and went on to play a series of hometown gigs before hitting the studio with vintage aficionado Christopher Hoffee at CHAOS Recorders in Escondido.

Now, having grown from a solo project of Davenport’s into a fully integrated quintet (including Andrew Armerding of alt-folk outlaws River City, Greg Theilmann of darkwave five-piece Dark Shapes, and drummer Carlos Ortiz of Davenport’s previous lineup, Gun Runner), Hills Like Elephants are gearing up for a nationwide tour — first stop, SXSW 2013 — to support their pending sophomore release, Feral Flocks, due to drop via Requiemme Records/BMG Chrysalis on February 12, 2013.

The title comes from a prerecorded zoo segment that Davenport overheard while interviewing with FM 94/9 host Tim Pyles and refers to lost birds of prey forming feral flocks to migrate home.

There’s a metaphor in there somewhere, Davenport agrees, disclaiming: “I’m not trying to be profound. Like, if I wouldn’t say it to you at a bar, I won’t say it lyrically. I’m not going to start spouting poetry.”

Davenport says Feral Flocks strikes an upbeat contrast to the laments of his debut.

“On Endless Charade, I was harping on the idea of past relationships, but I was also trying to move on,” Davenport says. “Feral Flocks is more about noticing the subtleties of life.”