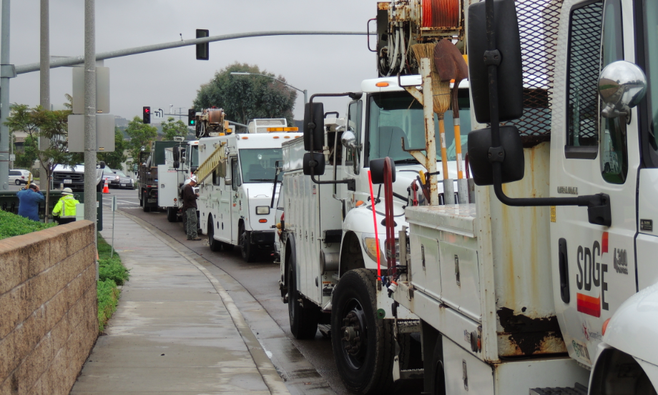 Last Friday, November 30, I was reminded of the dangers of electricity as I ignored orange safety cones and approached SDG&E workers at an open transformer box at Melrose Drive and Rancho Santa Fe Road.

At 5 p.m. the previous day, a car had crashed into the green box, likely due to the rain, and the driver was neither injured nor cited, according to Carlsbad police. But the power was interrupted, darkening the homes of about 6000 residents for several hours. A few hundred houses were still without electricity the following day.

The two workers I attempted to interview were both friendly, but as I was asking questions, one of the men interrupted and said I should leave the area.

“We’re in the process of energizing right now, so don’t get too close — anything can happen,” he said.

A soft drizzle was coming down, and as I looked down at my feet I saw I was standing on moist grass near the open utility box. With a start, I was gone.

I survived being electrocuted in 1988 when lightning struck a water puddle I had been running through, barefoot, in the midst of escaping a sudden summer thunderstorm in the high desert of Lucerne Valley, California. The doctors told my parents that the bottoms of my feet had burn marks on them, but I mainly remember the massive headache and entire-body tingling that lasted several days.