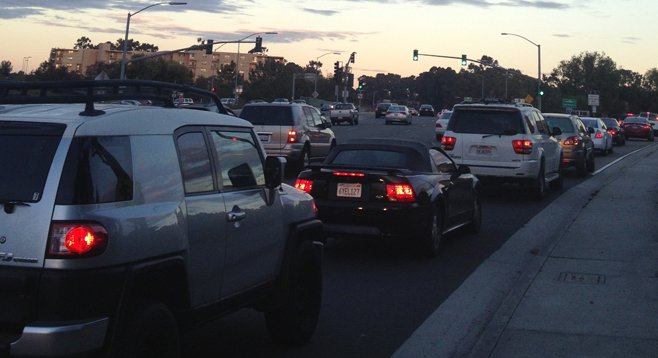 Do you like it? I love it. I like its fuel efficiency and its comfort. I think Toyota has done a really good job making a sedan that’s really luxurious. It feels like a luxury car. It’s all leather, and it has lots of bells and whistles, and it’s still reasonably priced.

Is there anything you don’t like about your car? I think the gas tank is a little too small. I still have to fill it up a lot, even though it gets great gas mileage. If the tank were just a little bit bigger, I could go longer without filling it up.

Tell me about the car you had before this. The car I had before this was a 2003 Nissan Altima, and I loved it. I had over 200,000 miles on it, and I didn’t want to buy a new car. I ran it completely dry of oil, and I put new oil in it, and it kept going like nothing ever happened. I didn’t want to, but I was afraid it would leave me stranded, so I sold it for $500 and bought my Toyota.

What’s your favorite drive in San Diego? Have you ever driven [the Del Dios Highway] between Encinitas and Escondido? It’s right through the mountains, there aren’t very many billboards, not a lot of traffic, and there’s some body of water down there that, I don’t know what it is — a spring or a lake [Lake Hodges] or something — it’s beautiful.

Do you have any accident stories? The first day I ever drove — the first day I had my license — I was allowed to drive to a play at school. It wasn’t very far from my house and I knew the way; I had practiced this with my mom a million times. And I did great. And then on the way home, I got into the car and I turned on the music, and I backed out of my parking spot, but I cut the wheel too hard and I hit a car. It turned out to be my teacher’s car. It was mortifying. And he had never been in an accident. It was the first time he’d ever had to call his insurance company. And he was trying to be nice about it, but you could tell he wasn’t happy. And neither was my mom. She said, “I told you a million times: go straight back and then turn.”

What do you listen to when you drive? I flip through every radio station, I find a song that I like, and then when it’s over, I flip to the next. I have a little button on my steering wheel and I just coast through all the stations over and over again. I can always find something. It’s not always good, but it’s listenable. And I can sing along.

What’s your favorite shortcut? I have exited on the next exit at Bay Park and then backtracked, because sometimes it takes a long time to get off at the P.B. exit. I’ve only done that once, out of desperation...there were so many cars.