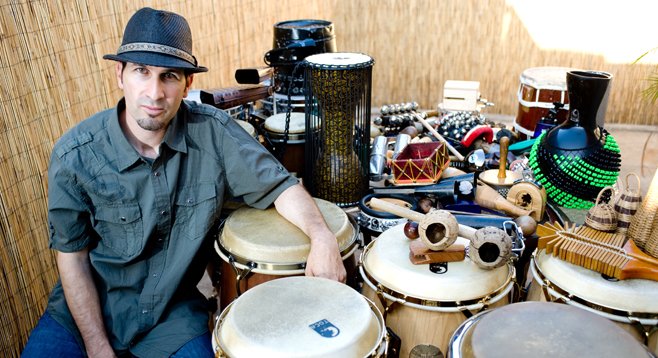 Steve Haney has found himself in some wild, unexpected places

‘My band Jungle Fire was recently asked to make an appearance on the Showtime season finale of their show Dexter,” says Mission Valley percussionist Steve Haney, who also plays with the Anthology House Band and Otro Mundo. “The casting director needed a band to perform the closing scene celebration for Dexter, with the same instrumentation as us, which is an eight-piece group consisting of three horns, two percussionists, bass, guitar, and drums.”

The taping took place in Burbank and ran six hours, though the band had no spoken lines. “The scene was a New Year’s Eve salsa theme party, because I guess some of it takes place in Miami, so they wanted that vibe. I was aware of the show but have never watched it.” The afro-funk ensemble ended up playing along with two prerecorded salsa-style tunes. “Neither of them were Jungle Fire songs, but a lot of the band members are big fans of the show, so they were thrilled to be there.”

Haney says his career has taken him to “wild and unexpected places. I got the opportunity to record with Stevie Wonder at his Wonderland Studios in L.A., and then I played with him at the 2008 Democratic National Convention. I performed on the Oprah Winfrey show and shook hands with her backstage, and I even got to speak with president Barack Obama inside the White House, during a photo op, after performing with award-winning Indian composer A.R. Rahman.”

The native San Diegan has also played with local groups such as Samba de Toquali and the Bi-National Mambo Orchestra, though his steadiest weekly gig for several years now has been with the Anthology band. Along the line, he’s also recorded and performed with the Brand New Heavies, the Greyboy Allstars, Ozomatli, Karl Denson’s Tiny Universe, Michael Franti’s Spearhead, and Jurassic 5.

ANYTHING YOU WERE EMBARRASSED TO MENTION?

“‘I Gotta Feeling,’ by the Black Eyed Peas.”

TELL US SOMETHING WE DON’T KNOW

“Most dust particles in your home are made of dried skin.”

“Bad Brains at Iguana’s in Tijuana, Mexico, in 1989. It was pure, raw energy from the first to the last note.”

“Travel all through Africa and the rainforest of Brazil.”

“Not being fluent in Spanish. That one should be on my bucket list. It’s a goal I need to accomplish.”

SONG THAT BEST DESCRIBES YOUR LIFE?

“I’m afraid of heights, and I have arachnophobia — a fear of spiders.”

“Falling off my skateboard going down Fletcher Parkway hill and scraping up the whole right side of my body.”

WHERE DO YOU TAKE OUT-OF-TOWN GUESTS?

“Sunset Cliffs...or the La Jolla Cove to check out the sea lions.” ■

Outtakes: IN WHAT FICTIONAL UNIVERSE WOULD YOU LIKE TO LIVE? “Star Wars, during the bar scene.”

BEST AND WORST THINGS ABOUT LIVING IN MISSION VALLEY? “The best is the view, and the worst is that there aren’t any good restaurants within walking distance.”

WHAT WOULD YOU TELL THE YOUNGER YOU? “Don’t believe the hype of mass media.”

HEY, WAIT, WE ARE THE MASS MEDIA! “Okay then, question authority!”

SOMETHING YOU NEVER RUN OUT OF? “Hummus.”

DO YOU BELIEVE IN MAGIC? “I’m always captivated by the art of a good magician.”

FAVORITE MOVIE BASED ON A BOOK? “Willie Wonka and the Chocolate Factory. Gene Wilder is perfect in that one!”

THREE THINGS ABOUT YOU THAT WOULD SURPRISE US? “I believe every politician is a crook, I don’t like shellfish, and I’ve seen almost every stand-up comedy DVD ever made.”