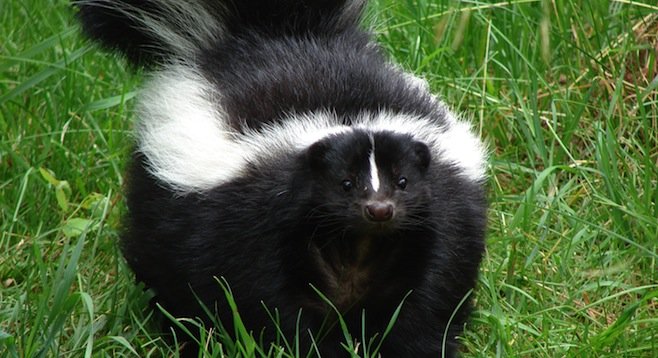 “How did you know zat?” Ency asked.

“But vee had him vashed,” Ency argued.

“I think you guys have just grown accustomed to the smell,” I said. “I mean, it’s pretty bad. And I’m one of those people who likes the smell of dead skunk on the road — it reminds me of cross-country family road trips.”

Ency explained that she’d used baking soda and dog shampoo. When I showered the next morning, I knew I was standing in the bathtub she’d used as a decontamination tank. It seemed even the plastic of the shower curtain had absorbed some of the eau de skunk.

Riley is a bichon frisé — a snowy white, curly-haired, high-maintenance lap dog that regularly wheezes, snorts, and sneezes in explosive fits and has a penchant for yapping and kicking up his hind legs to drag his oft-irritated ass in circles on the Oriental carpets. My in-laws treat their pet as they would a visiting dignitary. He is catered to, doted upon, tiptoed around, fed an easily digestible and allergen-free mixture of venison and sweet potato, and rides shotgun in the car.

I see how happy the creature makes David’s parents (that is, when the animal’s frequent illnesses aren’t stressing them out or bleeding them financially). I think it’s great that they rescued him from a house that couldn’t handle two bichons (Riley and his brother, Reggie — a plumper, more even-tempered version of Riley). 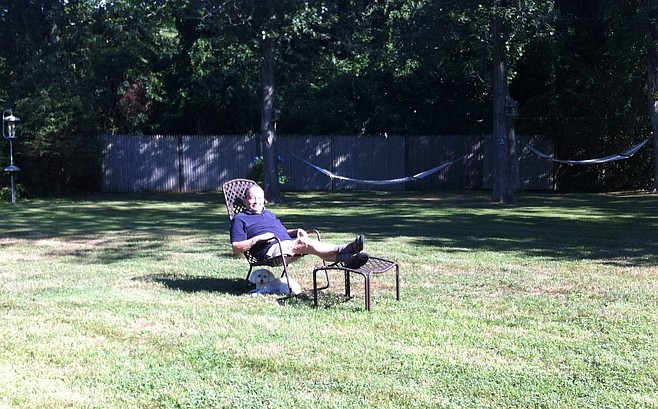 Riley, under Robert's chair in the summer

Despite my affinity for furry friends, to me Riley is a child only a mother could love. I just can’t bring myself to like the difficult creature. Usually when I spot a dog, I “Aww, doggy” and “Come here, you,” and I just want to wrap my arm around its fluffy neck and give it doggy noogies. When I encounter Riley, I’m merely cordial. I give a nod, a “Hello there, dog,” and continue about my business. I have never warmed to this particular pup, and I think he knows it. 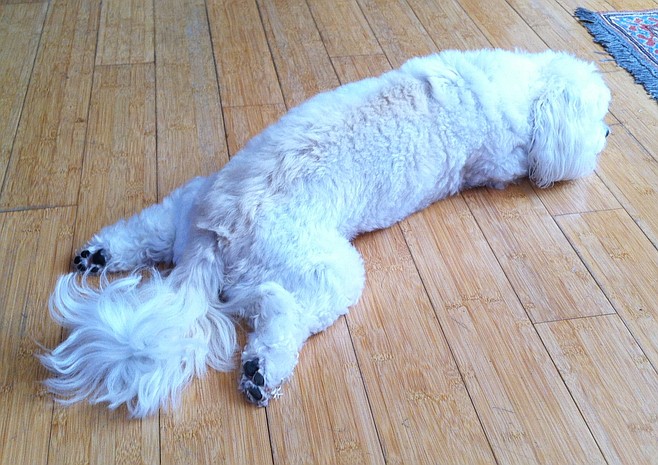 Riley, sprawled on the kitchen floor

In whispers when we went up to bed, David and I considered the possibility that Riley had intentionally gotten himself skunked prior to our arrival. (On previous visits, the dog made his disapproval of our presence known by pissing on the threshold of our bedroom nightly until a gate was installed to keep him from the area.) Throughout the day, we followed our noses to find him at our feet, and when we wrinkled our noses and moved away, I could swear I detected a glimmer of satisfaction in those black, unblinking eyes.

The following day, David breathed into his sleeve whenever the dog drew near him. Distraught at her son’s obvious discomfort, Ency sought advice from friends. One of them recommended washing the dog with a Massengill douche. The product name conjured early-childhood memories of commercials featuring women wearing pastels in the rain and daughters asking mothers about the “not so fresh” feeling. Even as a preteen with no practical knowledge of my lady parts, I was disturbed by the notion that certain areas of my body had the potential to grow stale.

I didn’t think douches were still available — when I came of age years ago, doctors had long been advising against their use, saying they cause all kinds of health issues. When Ency found a box at the local drugstore, I wondered if its existence on the shelf had anything to do with the fact that the freshness formula of vinegar, baking soda, citric acid, and whatever else was in there was said to be a good de-skunker for pets. Surely nobody bought it for its original intent.

Though I’ve encountered Pepé Le Pew’s American cousins around my mother’s house in semirural Chula Vista, they don’t seem to frequent the neighborhood where I live, closer to the city. I could remember when our dog, Penny, was sprayed — we’d used a bath of tomato sauce, to no avail. The poor Brittany/cocker spaniel I grew up with stunk for weeks.

Skunks are a big issue on the island of Martha’s Vineyard, where the critters have no natural predators (in San Diego, coyotes keep the skunk population in check). There’s one guy on Martha’s Vineyard who has a kind of monopoly on the skunk-and-raccoon-removal biz. The week before their dog got skunked, my in-laws had received a crudely handwritten bill for ten skunks caught at $80 a piece. While Ency and Robert were debating whether or not to pay $800 for the alleged removal of skunks from their property, Riley pranced in the door carrying the foul stench of proof that Mr. Skunkaway was likely a scam artist.

A few mornings after we arrived, I was heading toward my mother-in-law in the kitchen when I hit a wall of stink and stopped abruptly. I put my hand to my face to breathe in the vanilla lotion I’d applied to my skin after showering. “Oh, no — he was sprayed again?” I asked, my words muffled into the back of my hand.

Ency looked pained. “No, he doesn’t. He doesn’t smell anymore; he smells good.” She was clearly in denial.

When David came down, he quickly lifted the collar of his shirt over his nose. “We’re going to have to get out of here for a little while, at least until the dog dries,” he said.

“Right there with you,” I agreed. 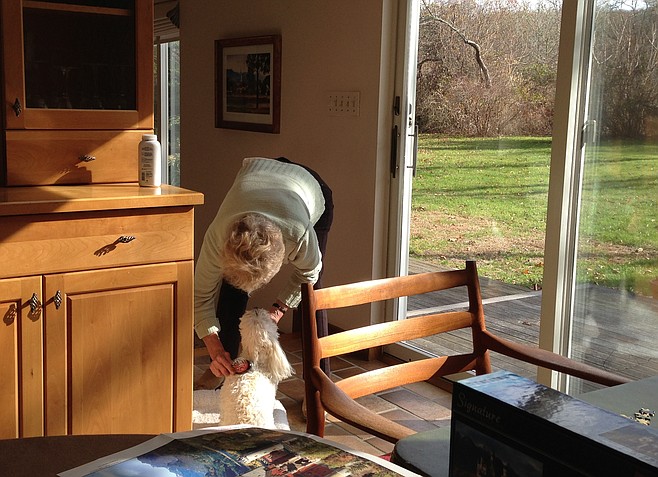 Ency brushed baby powder into Riley’s fur. As we gathered our things to head out, I heard her say to her pooch, “You smell nice,” in the same tone of voice my mother used when she reassured me that I was cool, no matter what the mean kids at school had said.

Lorie G. says: That was hilarious and touching. I laughed and misted. It is true that douche is pretty much the identical antidote to skunk smell. When Peanut got a full-frontal face spray, we went on-line and found the recipe of baking soda, lemon juice and peroxide, mixed with water. It helped, but the smell lasted for months.

I don't think I've laughed this hard in years! What a story! Hopefully, Riley has aired out by now.

I live in Normal Heights and I can tell you there are plenty of skunks, raccoons and opossums for that matter in the mid-city area. I am convinced that my little terrier likes the smell of skunk. Last summer I humanely caught and then released a total 6 skunks down in Mission Valley by the river. I borrowed a feral cat trap from the county, wrapped it in a tarp and baited it with cat food. Like thieves in the night or very early morning my husband and I would rise early and transport them in his truck to the release site all before he went to work at 6:30 AM. After the 6th skunk I convinced him it would be easier to block the holes along our fence line.