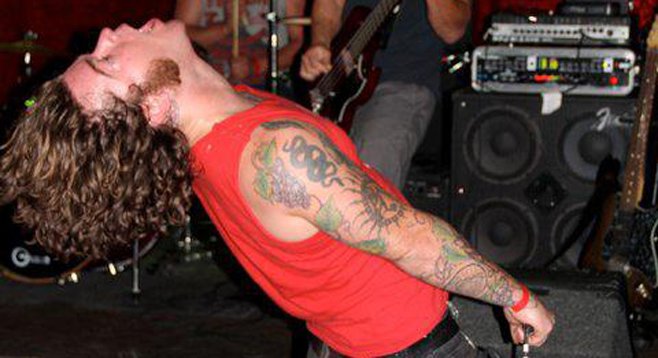 “We knew our van had a headlight that was burned out.” On the night of November 1, Coda Reactor was pulled over in the course of a routine traffic stop — or so they thought, says frontman Miles Orff. “Three cop cars pulled up. One of the cops says to us, ‘You know why we pulled you over, right?’” It wasn’t about the dark headlight. “They pulled us over for looking suspicious in a creepy white van.”

But that wasn’t the highlight of the evening. In fact, the reason Coda Reactor was even on the road at that particular time was because the band had just been ejected from the Boar Cross’n club in Carlsbad.

The next day, Orff, 30, posted the following message on Facebook: “BANNED FROM BOARS CROSSING. Who gives a shit!! Thanks to Oddball tho. They [are] our friends. What’s wrong with some Cock N’ Balls?? I Thought this was America.”

“That show [featuring Oddball and Pass the Axe, among others] was set up months in advance,” Orff explains by telephone. “We were told we had a 45-minute set. After we loaded our gear, the sound guy told us we had to cut it to 30 minutes. And then 15 minutes in, he told us we only had one more song.” This is when Orff left the stage.

“I jumped into the audience and took off my pants.” He says he did it to “piss off the sound guy.” It did. Orff was ejected from the club. Power to Coda Reactor’s gear was cut and the lights were dimmed. “The sound guy came up to the stage and he shook his head. And then the bouncers surrounded me.”

Coda Reactor, home-based in City Heights, has been around for a couple of years. With one CD out and another in the works, the members include guitarist Riff Vomit, Scott Jones on bass, and drummer Tim Helton. “We’re not really punk, and we’re not really hardcore,” Orff says. “We’ve got a space-metal thing going on.”

The quartet is on the bill for the End of the World Party 2012 at Brick by Brick on December 21. But Orff does confirm that Boar Cross’n management has indeed banned the band for life, which he takes in stride. “I don’t think we’re gonna be playing anywhere in North County anymore. It’s not really our thing up there. We did get away with the one-headlight thing, though.”