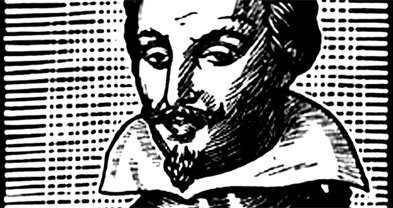 Assault the Place of Peace

By rights, we should call San Diego “San Miguel,” after the archangel who evicted Lucifer and his minions from heaven. At his first landfall in Upper California — September 28, 1542 — Juan Rodríguez Cabrillo found a “sheltered port and a very good one.” The explorer named it San Miguel for two reasons: September 29 was the archangel’s Feast Day; and the smallest of his three ships, the leaky frigate used to scout the promising bay, was the San Miguel.

Sixty years later, Sebástian Vizcaíno sailed in search of a safe “midway” harbor for galleons coming from Manila. Though the viceroy of New Spain ordered him to honor Cabrillo’s place names, Vizcaíno developed a severe case of cartographic amnesia: he swore he couldn’t find any original sites and had to rename everything. Among the changes, Cabrillo’s Isla de San Salvador became San Clemente Island, and San Miguel became San Diego.

So who was Sebástian Vizcaíno? According to Robert Glass Cleland, he had “the knack of obtaining position and recognition out of all proportion to his talents.” Charles E. Chapman: “a moderately successful merchant who [desired to become] a conqueror.”

Conde de Monterrey, the viceroy, was of two minds. When Vizcaíno wanted to lead an expedition to Baja in 1596, the viceroy objected: “The king would risk royal prestige if [it] were entrusted to a man [without] the resolution and capacity necessary for so great an enterprise.”

The viceroy later relented. He saw no “notorious defects,” he wrote the king. Vizcaíno did seem to have “medium yet sufficient ability.” Even so, the viceroy added, he did all he could to “clothe [Vizcaíno] with authority in view of the great danger I fear on his account.”

The viceroy, for whom Vizcaíno named Monterey Bay, was prophetic — in both minds.

Born six years after Cabrillo sailed north, Vizcaíno had firsthand experience of the dangers. A Basque soldier who fought in Flanders and then became a merchant, he was on board the Santa Ana when Thomas Cavendish looted the galleon and stranded the passengers at today’s San José del Cabo. Vizcaíno “lost a great deal of treasure and commodities,” he wrote, to the English privateer.

Vizcaíno’s expedition left Acapulco in March 1596, with the 500-ton San Francisco, and the much smaller San Joseph and Tres Reyes. He had a 20-year royal license for fishing and mining from Navidad to California. He brought a force of 230 men, women (wives and “servants”), and slaves (black and Indian, all branded like cattle), plus 14 horses and rations for eight months. Four Franciscans joined the party, a sign Vizcaíno meant to establish a colony, not just fish for pearls and explore the region. At Salaga, another 120 men and 14 more horses came on board.

As they took on supplies and fresh water at Mazatlán, at least 50 sailors and a priest vanished into the scenery. The mass desertion happened “without illness or cause,” writes Michael Mathes, and set a “poor example for the others by creating doubts and fears.”

Vizcaíno hurried the departure so more soldiers wouldn’t jump ship. (Most of the ones that remained, writes Mathes, “had brought their wives and children.”)

Battling strong, northwest winds across the gulf, Vizcaíno made landfall on September 3. Eight hundred natives fanned across the beach. Although they carried bows and arrows, they greeted the ships with friendly, waving hands. Before he had to abandon it to hostile Indians, Hernán Cortés originally named the site Santa Cruz. But Vizcaíno, so struck by the reception, called it La Paz — “the peace” — the first of his many renamings.

When the Spaniards came ashore, the priests constructed an altar: in the center, a cross; to the side, an image of the Virgin Mary. At a signal from a priest, all 300 in the party knelt at once. Struck by the gesture, the natives also dropped to their knees. Over 1000 people kneeling before the symbols of his faith: Vizcaíno took the sight as approval from above.

The next day, as workers built a brush stockade, 200 natives brought pitahayas (cactus fruit), lizards, and snakes, the delicacies of their diet.

Because Vizcaíno had funded the expedition, the viceroy fretted about the “overbold bearing of the soldiers” Vizcaíno would hire. Most were Spanish dragoons, not the more professional, and expensive, soldados de cuera, “leather-coated soldiers.” Dragoons, whose training varied from little to none, notoriously lacked discipline.

Not wanting to cause alarm, and possibly remembering Cortés’s troubles, Vizcaíno ordered his men back to the coast. Around sundown, several Indians came to the settlement with pearls. Vizcaíno returned the favor with mirrors and knives.

Whirling, gale-force winds prevented exploration of the western coast, so Vizcaíno sailed the San Joseph and the Tres Reyes up the gulf with 100 men. They anchored at a small bay, where a large group of natives met them with signs of welcome. As the soldiers built a stockade and refilled their barrels with fresh water from two running streams, they found nails, knives, and horseshoes. The rusty relics from the Cortés expedition were reminders of former strife.

Vizcaíno had left 80 soldiers at La Paz. In his absence, the San Francisco ran aground on the long sandbar that separates the lagoon from the bay. Captain Rodrigo de Figueroa, in charge of the settlement, ordered the ship unloaded. Vizcaíno had to sail back to tow the empty flagship to safety.

It pleased Vizcaíno to see the buildings for the colony completed: sturdy walls and structures, and deep trenches to discourage invaders. But a large group of angry colonists handed him a petition: they demanded to return home at once. The sterile land would not support them, and the natives were so “barbarous,” no one could convert them. One reason: soldiers were abusing native women.

Vizcaíno called a general assembly. He ordered each of the frustrated colonists to step forward — and denounced them. He would not stand for insubordination. Anyone even talking about going home would be “punished by death.”

With that, he sailed north. Four days later, a fierce storm separated the two ships. Vizcaíno continued, and on October 13 took part in an incident that, according to Henry Wagner, he later tried to cover up.

As the San Joseph hove into a small bay, Indians in five balsa canoes rowed out with greetings. They made signs: come ashore, have a meal. “Noting that these Indians were better armed and more agile than those at La Paz,” writes Mathes, “Vizcaíno anchored and sent 25 men and the Master Sergeant ashore in [a launch].”

More natives emerged from behind rocks. Vizcaíno ordered the Master Sergeant to come back for 25 more soldiers.

The soldiers and natives traveled half a league inland. They stopped at a water hole, then continued to a village where the Spaniards enjoyed a feast of fish. Once again, the reception pleased Vizcaíno.

Then, in an instant, a soldier shouted something, grabbed his rifle, and bashed an Indian’s chest with the butt end. No one saw — or chose to remember — why. Festivities froze. Looking around, rapidly reading native eyes for clues, Vizcaíno ordered his men to pull back slowly and return to the beach.

A legend grew around the cause. Supposedly, young Don Lope, the viceroy’s page, fell in love with Doña Elvira. She said she would marry him. But first he had to find, or replace, a pearl she had lost. When he heard that Vizcaíno — the “pearl king,” thanks to his royal license — was leading an expedition to California, Don Lope signed up.

He wasn’t just one of the men at the fateful meal; the story goes, he caused the trouble. The chieftan’s daughter wore a pearl identical to Doña Elvira’s on a necklace. Don Lope walked up, ripped it from her, and shouted, “That’s my fiancée’s!”

When he brought the pearl home, Doña Elvira confessed she’d never lost one. She was just teasing. They got married and lived happily ever after.

Whatever the cause — the legend most likely softens blank aggression — as Vizcaíno’s force retreated to the beach, 100 natives followed close behind.

Vizcaíno ordered four soldiers with arquebuses — rifles on tripods — to fire over their heads.

The roar, which ripped the air like nothing they’d heard before, surprised the natives. But since no one was harmed, they continued their pursuit.

At the beach, Vizcaíno and 25 soldiers boarded the launch and rowed out to the San Joseph. When the launch returned for the other 25, they wanted to stand their ground and fight it out with the natives, even though they lacked proper artillery.

As soldiers shouted the universal language of battle — taunts and curses — the attacking force regrouped: 100 became 200; then 500 natives scrambled down a hill, howling shouts of war. They darkened the sky with stones, spears, and arrows.

Heavy leather armor protected many of the soldiers. Missiles clacked on five layers of compressed hides, bullet-shaped helmets, oval shields, and fell to the sand. But when an arrow pierced a soldier through the nose, the others panicked and raced to the launch. Several jumped on one side. Others piled on top of them. Water poured over the gunwale. The boat filled up and sank. Chased by splashing arrows, six men swam to safety. Nineteen others drowned.

With no launch, Vizcaíno had to return to La Paz, on October 18, with news of defeat.

Three days later, as cooks prepared an outdoor meal, a north wind flicked sparks onto a straw roof. Flames leapt from building to building. Before the colonists could control the blaze, half the settlement, including most of the food, burned to the ground.

Vizcaíno needed no seer to interpret the sign: the experiment was over. He ordered the San Francisco and the Tres Reyes back to New Spain. He would continue to explore in the San Joseph.

A six-day storm stranded the San Joseph at El Puerto de la Muerte (“Death Port”), where the 19 men had drowned. No one dared go ashore. On November 9, the San Joseph headed up the coast, but started to take on water. The crew demanded a halt, but Vizcaíno refused; they’d had enough problems with natives. He ordered the pilot, Antonio de Rivera, to inspect the hull for cracks.

Rivera traced the leak to the forward keel. Someone had burrowed a hole with a short, dual-edged broadsword.

No one identified the saboteur, which infuriated Vizcaíno. Several days later, the rudder controls suddenly snapped, and the repaired hole began leaking again.

Vizcaíno suspected multiple saboteurs. Was the burning of the settlement also by design? He ordered a return to New Spain. The San Joseph wobbled home, “God in pity conducting us.”

Along the way, the San Joseph anchored off Puerto de la Muerte. Vizcaíno told a shore party to torch all beached canoes.

Back at Salaga, Vizcaíno sent reports to the viceroy and the king. The voyage was not a failure, he protested. They had just sailed during the wrong season. Storms prevented finding pearls.

He proposed a return voyage: five ships supervised by royal officials, plus disciplined soldiers and proper artillery, at least a year’s supply of food, and more priests and “religious ornaments.”

In the letter, Vizcaíno revised his reasons for the expedition. First, the natives needed conversion. Second, the pearl beds, for which the crown would receive a generous portion, were of “excellent quality.” Third, many natives spoke of cities “twenty days travel overland,” where the people wore gold earrings” and cloaks decked with silver — the fabled Seven Cities of Cibola?

In spite of many naysayers, Vizcaíno won the assignment. Five years later, he sailed north once again.

Next: Across the Vermillion Sea. ■