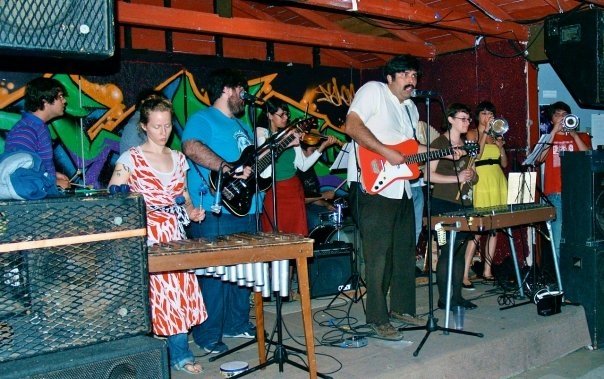 Tropi-Cali act Red Pony Clock has a fluid lineup ranging from 10 to 13 members, and they describe their music as “clarinet and xylophone–driven vaudeville-a-delic joy pop, influenced by mariachi and seething with the eternal teenage spirit.”

“Most of the members are first-generation Mexican-Americans,” says bandleader Gabe Saucedo, “and we listen to a lot of stuff, including music native to our homelands. Eventually, though, everything we like makes its way into our music — it all runs through the same filter of barely adequate musicianship.” The band is working on a music-based animated children’s story, The Legend of the Red Pony, featuring multimedia images and filmed sequences, planned for release on DVD.

MOST EMBARRASSING SONG IN YOUR COLLECTION?

Dave: “My stash of Coldplay B-sides.”

Samantha: “I got nostalgic for the ’90s a few years ago and downloaded a bunch of Gin Blossoms songs.”

BIGGEST LIE YOU EVER TOLD?

Gerry: “I once performed ‘You Won’t See Me’ from Rubber Soul to an ex-girlfriend and told her that I wrote it.”

Samantha: “I like to lie to myself and say it wasn’t a mistake to pursue a doctorate.”

Gabe: “I was 28 years old and got in a shoving match with a pushy transvestite at a bar in Copenhagen’s red light district.”

Melina: “I got drunk with my best friend in her bedroom when I was 18. We couldn’t control our gas and thought it was the funniest thing in the world.”

Dave: “I was 16, in Newport Beach with three of my best friends, and we each drank a bottle of Boone’s Farm Strawberry Hill and rented a Quad Cyclone bike.”

Samantha: “A crazy-hat party at UCSD when I was 18. I can’t remember what type of hat I was wearing, but it might have been an empty case of Squirt.”

Gabe: “Neutral Milk Hotel and Olivia Tremor Control at a warehouse in San Francisco in 1998. That I went to that show is the reason Red Pony Clock exists.”

Samantha: “The Stooges in Lucerne, Switzerland, 2005. They played the hits and then called the audience onstage for ‘No Fun.’ Oh, and I jacked a set list.”

Normandie: “The Flaming Lips. I laughed, I cried, and I left feeling more hopeful about life.”

WHAT SONG BEST DESCRIBES YOUR LIFE?

SOMETHING WE DON’T KNOW ABOUT YOU?

Dave: “I’m the most Mexican-looking guy in my circles of friends, but I don’t speak Spanish.”

Samantha: “I love Garfield the cat.”

Normandie: “I used to be a professional dancer. G-rated.” ■

Outtakes: FAMILY MEMBER YOU MOST TAKE AFTER? Gabe: “Got the spicy Latin temper from my Dad.” Melina: “I got my awkwardness and good skin from Dad. Everything else, I got from Mom.” Normandie: “My Grandma. I can’t run errands without a huge glass of iced tea, and I watch birds all the time.”

WHO MAKES OUT IN YOUR WILL? Gabe: “I gotta leave Melina all my stuff, not just because she’s my wife, but ‘cause I owe her money.” Gerry: “My PlayStation 3 goes to Gabe, even though he swears he doesn’t want it.” Melina: “All my stuff is going back where it came from; the thrift store.”

ANY FEARS OR PHOBIAS? Gabe: “My brain dying before my heart does.” Gerry: “I don’t like silence. It weirds me out.” Melina: “Being ripped to shreds.” Dave: “Salmonella.” Samantha: “That I’ll get trapped in or knocked over by a revolving door.” Normandie: “I’m very afraid that I’ll be the target of a serial killer.”