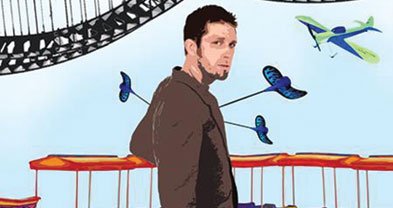 Singer-songwriter Kevin Martin, frontman for Get Back Loretta, is best known for his Beatle-esque melodies. Indeed, the Vista resident’s new solo album is titled Throwback Pop. However, the Occupy San Diego movement has inspired Martin to make the video for his song “TV News” a political statement.

Ongoing since October 7, Occupy is centered on activities at Civic Center Plaza downtown. According to Kayla Ward, an event organizer with Occupy, performers who have taken part in the rally were chosen from a list of volunteers, in order of their availability. “The policy — ours and the city’s — is that the musicians must play acoustic music,” she said.

Artists who have performed include Todo Mundo, Liquid Blue, and Martin, whose appearance October 8 was more impromptu. “[Cowriter Lauren] Scheff borrowed some kid’s guitar, and we just played it through the PA they were using to protest through,” Martin said.

The live footage was captured by photographer Steven Brannen using a hand-held camera. The finished video, which was posted to YouTube the same day, incorporates the studio version of the song with footage of the NYC Occupy Wall Street protests. At press time, the clip had garnered more than 1600 views in three days.

The reason for Martin’s visit to Occupy San Diego was his belief that news media had not done a fair job of covering the events. “The Occupy movement has gotten a lot of negative press, and I wanted to go see for myself what it was all about,” Martin said. He was pleased with the event’s organization and the reaction to his music. “I think the message of the song ‘TV News’ is really in sync with the message of the Occupy Wall Street movement,” he remarked. “People are finally becoming aware of the corporate greed and misuse of government. Watching families lose their homes, small businesses fail, and people lose their jobs while huge corporations rake in billions of dollars and get bailout money is what motivates me to get involved.”

Martin says performers have a duty to speak out. “I think music has a great capacity to inspire people. That’s the main reason I wanted to have my music video linked to the movement. I really want to empower people to stand up for what they believe in and be fearless while doing so.”

Though Martin considers the Occupy movement to have merit, he’s also realistic about change. “Protesting is great, but at the end of the day we need to get involved with our local government and vote. Our real power is going to come from exercising our democratic right to vote. So the protests should really just be to get the word out that things need to change.”

here is the link to "TV News" from Occupy San Diego - http://bit.ly/OWStvnews