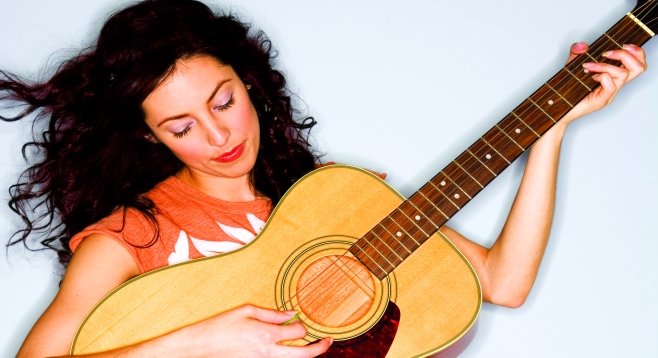 Heading down the stairs to the mezzanine at the back of the car, I attempt a bank shot into the corner trash bin with the straw from my morning coffee, my other hand tightly grasping the handrail. I wait impatiently in line behind eight others who will disembark at the next station.

I am surrounded by a group of elementary- and middle-school kids headed to Parker or St. Augustine’s, ultimately destined for USD, shoving each other, laughing, talking about ski vacations in the Swiss Alps, speaking French or Italian into their cells, carrying overloaded backpacks and lacrosse rackets in expensive monogrammed cases. Overall, I’ve always been amazed at how polite these boys are, so I cut them a lot of slack during the 45-minute ride. It is usually amusing to listen to them.

Today there is a young girl with an expensive guitar and nimble fingers, playing for the riders, all the way to work. Sitting alone in a four-seat mezzanine section, with her feet propped up in front of her, she plays her guitar and sings, reminiscent of Suzanne Vega or maybe Tracy Chapman. I glance at her several times, peeking between the seats. She has a foreign look, her skin an odd sort of yellowish orangey color — not a fake tan, natural looking — and her hair is coarse and above her shoulders, reddish and kinky. Her shoes look like they are from Spain.

She plays well, and her voice is melodious. Perhaps she’s a songwriter. The lyrics are romantic, the voice okay, the playing excellent. As the train lurches to a stop, I say, “Thank you. That was nice!” I hear her say, “No worries!” as the doors slide open.

I reassure myself that my handbag and lunchbox are part of my baggage and quickly navigate a path through the other commuters. I glance to the right and then step into the street, in yet another futile attempt to make it across the bus lane before the #15 cuts me off. This week alone: two new drivers, or angry drivers, have attempted to run me down. Not just me, but anyone in the crosswalk. Perhaps they don’t know that pedestrians have the right of way? Or they just don’t give a shit. This morning, one driver had the nerve to lay on his horn so he didn’t have to stop at the crosswalk. Should I send a note to MTS? Risk management, you know.

The air is stifling. Soap on school kids, a woman’s heavy perfume, an unwashed homeless guy, exhaust from the buses, burning fuel, and the metallic scent of dirt blanketing everything in the region from the state transportation project.

This government-funded hardscape and landscape contract forces every commuter to take the long way around to get to the trolley, the bus, or the street. Since it was launched, everyone seems to be rushing, safety be damned. Of course, they’ve hired guards to patrol the construction zone — although I haven’t seen anyone but the guards, so I guess the construction workers only work part-time. Nice. Bet they have a pension, too.

Meanwhile, all of the customers using the transit services have been forced to cross over several train tracks and run up and down stairs just to miss their bus — or, if they actually work nearby, to wait through at least two additional stop lights in order to get to work. And that’s if they’re lucky and a train or trolley doesn’t fly through the station, disrupting the sequence of those signals and causing a few more minutes to be lost.

Down the stairs to the tunnel, up the stairs to the bus stop and parking lot. That stairway is a challenge because my timing puts me at the top when a trolley is getting ready to leave, and the crowd surges toward me like a tsunami. They don’t give, they don’t care, they just want to make their trolley or train.

An old man in worn Levis is totally absorbed, pulling handfuls of bread crusts out of his backpack, scattering crumbs on the filthy cement walkway between the bus lanes. He looks up with a vacant look in his eyes, and his eyes quickly return to the birds pecking at the ground.

As I pass, little groups scoot to another area of the walkway. A black raven swoops low and grabs an ice cream wrapper, liquid vanilla streaming from the sky as he heads for the building across the street. The pigeons make a ruckus, pissed that the raven got the wrapper…and then they are distracted by the next handful of bread.

A woman in her 70s, with chin-length hair, a fake Rasta ponytail clumsily pinned on the back of her head with a giant clip: she looks like somebody’s mother gone wrong. She is smiling to herself but not making eye contact with anyone. She has a trash bag full of water bottles at her feet today as she waits for the bus. I’ve seen her on the train on my way home in the afternoon, with a cane and either a missing leg or wearing a heavy brace. I couldn’t tell.

Just last week, she was sitting upstairs and everyone was watching her as she slowly, painfully, made her way through the mezzanine area to the bottom floor. A young guy, sitting in the handicapped seat, jumped up and offered it to her, and she sat down, gratefully. As we approached the next stop, I saw her stand up and head back upstairs. She made it all the way to the top, where she was blocked by three guys who were trying to head downstairs to get off. I heard her say, “No, no, no,” and saw one man, with kind eyes, try to put a $20 dollar bill in her pocket, which she apparently had left on the seat. Her voice was getting louder — “No, no, no!” — so he grabbed the bill from her pocket and put it in her hand, feeling embarrassed, unsure of what to do next. The good Samaritan had set her off.

I stood up and saw another young guy watching her attempt to get back down the stairs. He held out his hand, and she said, “No, no, no.” His girlfriend had already made it to the main floor and was waiting by the door. Three of us now, watching her, eager to help, but she was having none of it.

I headed for the door as we slid to a stop. I raised my hand, waving my arm to get the conductor’s attention. The young guy and his girlfriend took off, and I heard him say something to the engineer as they passed. I was still waiting by the open door to help her out when she hobbled right past me and took a seat. The good Samaritan leapt out the door as the train started moving again. “That was interesting,” he said.

The conductor reached us, took one look, and said, “She doesn’t get off here” and jumped back on the train, closing the door.