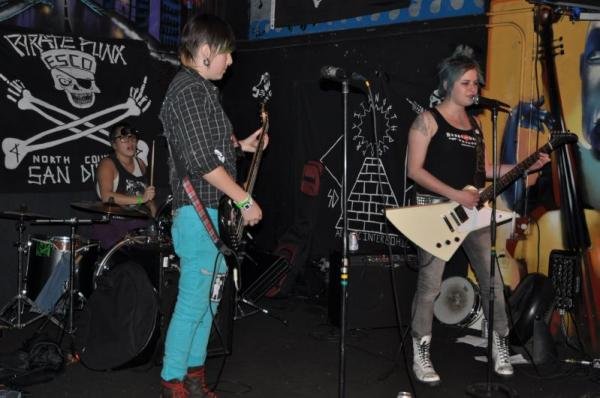 The Vindictive Bitches believe in settling scores. “If you fuck with someone, you get fucked with back,” says singer/guitarist Jesser Jaxx. “We played Mi Pueblo in Tijuana and some guy yelled out, ‘Show us your tits!’” says bassist/drummer Ary Squirtz. “I told him his tits were bigger than all of ours put together. If I had a bottle I would have thrown it at him.”

The Bitches play regularly at the Metaphor, Ruby Room, and the Yard with North County stage mates Apeste and Tres Borrachos Locos. But it’s the drummer of another band who regularly gets called out onstage by the three pissed off punks. “Fuck Gene Mope” is a vengeful tune about the drummer of Zombie Surf Camp who the Bitches say wronged them twice.

Mope dated Jaxx for three years. But it’s what Mope did to the other two members (Squirtz and fellow bassist/drummer Nikki Rimmer) that set them off.

“He cheated on me and Nikki’s girlfriends,” says Squirtz. She says when she found out that her girlfriend cheated with Mope, it ended a five-year relationship.

“We play pretty aggressive songs,” says Jaxx. “We write songs about revenge and what we’ve been through. That song is the angriest one we have. It gets everyone pumped up.” The lyric “You weren’t too drunk to drive, but you were too drunk to decide” is about one of the cheating nights.

Mope knows he’s skewered onstage by the Vindictive Bitches. “It cracks me up,” says Mope. “It’s a ridiculous situation. If that’s what they feel they have to do, then fine. I pretty much cut them out of my life.” He admits that he was “dumb and drunk” each time he hooked up and that he maybe should have “put a stop to the situation. But, each time, the advances were not on my part.”

While Mope says he doesn’t mind the verbal harassment, the spray paint is different. “They came in the middle of the night and spray-painted...‘Gene Mope is dead’ in front of my house and in my neighborhood. We called the cops. We were surprised...they just sat around and waited for five or ten minutes until the cops came.”

Rimmer responds: “I was the only one who got caught.” She says she just paid her final court-ordered fine and that she and Squirtz must have no contact with Mope for three years.

Mope says he never feared for his safety, and the ladies say they are thankful for Mope’s inspiration. They say they took their band name from a spiteful blog that Mope wrote. “He even wrote lyrics to one of our songs — ‘Vindictive bitches, you know who you are, minds dark and twisted, hearts black as tar.’ We just took his insults and turned them into lyrics.”

Zombie Surf Camp are currently on a West Coast tour. The Vindictive Bitches play June 11 at the Olive Pit in Pomona.