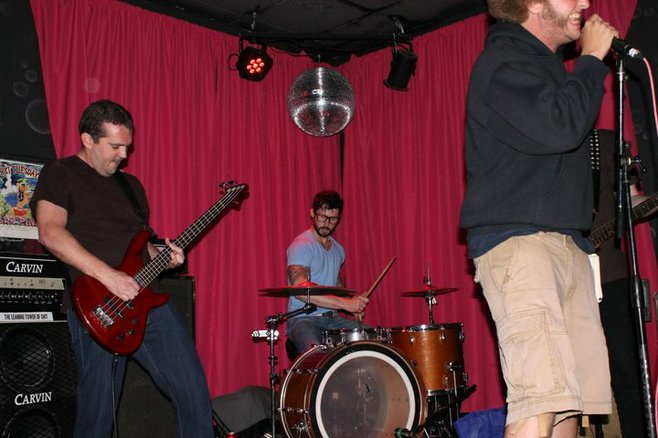 “It’s time to get weird! Play with strangers! Feel like part of a kinky experiment!” reads the poster for Pink Punk Lotto. A few days before the showcase, rocker, DJ, and PPL organizer “Swami” John Reis strains to formulate a prediction: “We need to see how this goes. I hope it’s a big train wreck — a watchable and listenable train wreck, with no fatalities,” adding, “I wanted to have my own lotto to ensure I’d get picked. The performances will be judged by a jury of my relatives. I like my chances.”

Onstage between bands on May 28, Reis explains, “About three years ago they did a lottery at the Casbah and I didn’t get picked. I was so frustrated, I got blue balls.”

For guitarist Sean Abrams, who’s playing with Rodolfo Bambill of the Beat-less and Reis in Leaning Tower of Shit, it’s a fledgling flight.

The judges, including Tim Pyles and Ryan Foxe, are scoring bands on “sound,” “presence,” and “songs.” Download Syndrome and Spock’s Ass earn respectable numbers. Pyles chides Hezbollah for getting onstage “late, late, late.” Stewarded by Jon Kanis on electric guitar and featuring Brandy Bell’s maiden banjo voyage, the group is bolstered by cheers. In the fourth slot, Leaning Tower of Shit dazzles like a diamond in a box of Cracker Jacks. With Reis pulling harmonies from a bouzouki and Bambill fronting and sharing electric guitar strokes with Abrams, the combo sears.

As Reis deadpanned earlier, when an unpopular score was booed, “You can disagree. But the last time I checked, this was America.” When asked whether PPL will reoccur, the swami gazes into the future and responds, “Next year.”