My mom says I’m turning her hair gray from stress. Is that possible?

Well, ya know, she might be right. Science guys aren’t quite sure if stress hurries up a head of gray hair, but they say it might be possible. 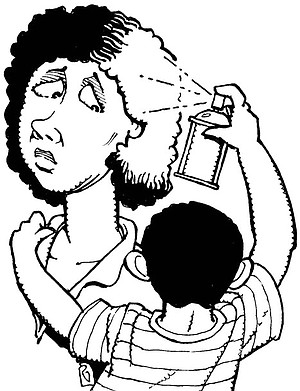 Each of our head hairs grows from a follicle at the base of which are stem cells that produce hair-growing cells and hair-color cells. Amazing as it sounds, each hair on our domes grows from two to seven years, then falls out, then is regenerated by the stem cells. The PhDs whose careers are based on poking around our hairdos speculate that hair goes gray as the hair-color stem cells crap out before the hair-growing cells do. The hair-growing cells produce a white hair shaft without the help of the hair-color cells, and we gradually go gray. (The hair-color cells crap slowly, not in one big, dramatic suicide, so the color goes gradually). Anyway, where you figure into this picture is, stress produces cortisol. The docs are investigating cortisol as one cause of the early demise of hair-color cells. So, once again, Mom has the experts on her side. Of course, she’s not going to go gray overnight. And there’s no truth to the white-haired wives’ tales that say you can go gray overnight after some big scare. That’s not possible. But the gradual graying of Mom might be kicked up a notch by your irritating behavior, Bad Boy.

This question might be too strange for you to deal with. The whole situation is pretty strange to me, so I’ll try to explain it as well as I can. I’ve noticed lately that if I’m not looking right at my husband while he’s talking to me, I don’t always hear him correctly. He’ll say the word “bed” and I’ll hear the word “dead.” Things like that. I suppose I could be losing my hearing a little bit, but the more I think about it, the more I think that it’s always easier to understand somebody who’s looking at you than somebody with their back to you. Is there an explanation for this? Or is this question just too strange to answer?

Nothing, absolutely nothing is too strange for us to tackle. Strange is what we do. Strange is who we are. Just ask the neighbors. And if your neighbor is named McGurk, you’re in luck. You have proved in your own little home what the science brain-trust spent many, many dollars proving in their spotless laboratories. Hearing is made up of two components — the ear part and the eye part. This is what Professor McGurk proved a few decades ago in his psychology digs in Scotland. Whether we’re aware of it or not, we include visual information from a speaker’s face (mouth, especially) in our auditory processing to get an accurate take on what’s being said. There are plenty of home-grown experiments (on the web) you can do to test this theory if you have a couple of cooperative friends. As usual, the exact mechanism that blends visual and auditory cues into a single process isn’t completely clear, but at any rate, it works. So, yes, Dave’s wife, you’re right that your eyes help your ears, especially when it comes to consonants. (Though I wouldn’t touch that “bed”/“dead” confusion with a stick. Psychology plays a part.) If you’re just now noticing that you need visual cues to help you hear might mean you’re losing a little hearing, but in general, you’re just like the rest of us.

My sister is having a baby pretty soon and she’s terrified that her child might go through life with an outie belly button. Is there anything she can do to make sure it’s an innie?

Unfortunately, this innie-outie thing should have come up earlier, when something could have been done about it. By now, the belly button die is cast. According to staff quack Dr. Doctor, when the umbilical cord is clamped and cut an inch or so from the baby’s body, blood vessels in the cord and the baby’s abdomen begin to atrophy. In about five days, the stump of the cord falls off and what’s left is the infant’s belly button for life. The size and shape of the healed umbilicus is genetically determined. There’s nothing the obstetrician can do to customize your sister’s baby’s navel.

If this had been the ultimate in planned pregnancies, many months ago your sister would have lined up all her close relatives and the close relatives of the baby’s father, had them hike up their shirts, and taken a belly button survey, checking for the ratio of innies to outies. If the prospective dad was from an all-outie family — well, she might have reconsidered the whole deal right then.

What--there's a MYSTERY to understanding words better when you can see the speaker's mouth? Well, DUH! It's called lip reading, and the deaf study it intently so that they can understand speech even if they cannot hear the speaker at all. But even without purposely studying it, most of us pick up lip reading to some degree just by the experience of looking at people while they speak. And, naturally, we make more use of it when it gets harder to actually hear the speaker's words, whether it's because we're in a noisy situation or because we're getting along in years and our ability to hear is diminishing. (It can also help when your ear canal gets really dirty!)

I don't think it's common for most people to realize that they do read lips while they think they're just listening with their ears. They do it but aren't aware they are. Lip reading by the deaf is something else entirely.