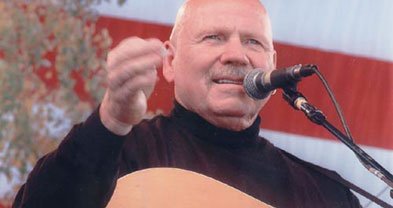 “Barry McGuire, best known for his antiwar hit ‘Eve of Destruction,’ has put together a musical show called Trippin’ the Sixties,” says promoter Carey Driscoll, who’ll bring the production to AMSD in Normal Heights on August 28. The multimedia show features rock songs and spoken tales of the psychedelic ’60s, performed by McGuire and John York (the Byrds).

“Barry and John’s show is a perfect example of ‘the whole is greater than the sum of its parts.’ Both sing and play well, but neither is the best singer or guitarist on the planet. However, the songs’ familiarity is highlighted by the great stories Barry tells, all of which are connected with the songs and the artists who originally recorded them, all of whom Barry was personally connected with.”

In 1965, McGuire’s growing awareness of the peace movement was expressed in “Eve of Destruction,” with lyrics written by P.F. Sloan (“Secret Agent Man,” “Where Were You When I Needed You”) and arranged by Lou Adler. “‘Eve of Destruction’ was recorded in the last 20 minutes of a 3-hour recording session,” says McGuire. “We’d already done two songs, and Lou said the third one sounded too much like the first one, so he wanted to do something else.

“Phil [Sloan] had given me a page from his songbook, with his hand-written lyrics to ‘Eve.’ I’d been carrying it around in my back pocket for the last two weeks, and the paper was all folded and wrinkly. I pulled it out of my pocket and said, ‘Hey, how about we do this song. I really like what it has to say.’ I smoothed out all the folds and wrinkles and put Phil’s lyric sheet on my little music stand over in the corner.”

The studio musicians only ran through the tune a couple of times. “Our engineer, Bones Howe, said, ‘Okay, we’re recording.’ He hit the red button and history happened. One take, that’s all we got.... I wanted to redo the whole vocal track, but there was a band out in the hall waiting to get into the studio, so that was it.

“If you listen to the third verse, you’ll hear me going ‘Aaaah, you can’t twist the truth’...the reason I’m going ‘aaaah’ is because I had lost my place on the wrinkly paper. I thought we could come back next week and re-record the vocal, but it never happened.”