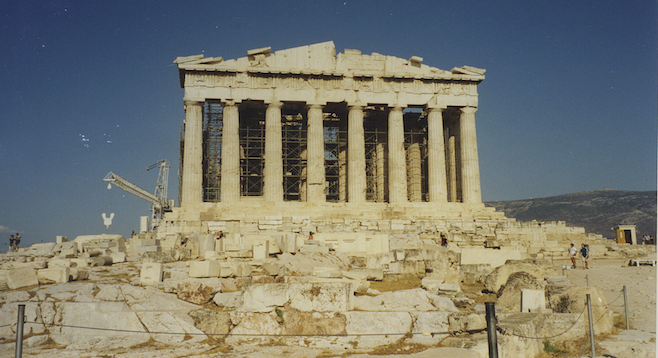 En route to Athens, my flight connected in London with a stopover just long enough to view the famous Elgin Marbles in the British Museum. Greece has been determined to have them returned to their rightful home at the Acropolis for years, and it was thought that the opening of the Acropolis Museum would pressure the curator of the British Museum to relinquish them.

Well, keep dreaming. Despite the entreaties of the Greek government and international sympathy on the side of the Greeks, the British Museum’s tenacious grip on the marbles remains. There they were lined up in a room in the museum, looking like well-behaved children standing awkwardly in a house that did not quite suit them. Surely, I thought, they would seem more appropriately placed in the new Acropolis Museum. This thought nagged at me as I rode the tube back to Heathrow.

The flight into Athens was made memorable by an elderly Greek woman sitting next to me who engaged me in an animated conversation without a seeming care as to whether I understood a word she was saying (I did not). For all I knew, she may have been advocating for the return of the Marbles.

Athens can be an intimidating city, overcrowded and rife with smog and poverty. I overlooked all such tawdry details and focused on the city’s magic, the ancient connections. I watched transfixed as my taxi drew closer to my hotel, passing the impressive ruins of the Temple of Zeus and Hadrian’s Arch. From my hotel room in the Plaka a few blocks away, I could see the Acropolis towering above. It was a surreal sight, like something out of a dream.

As I walked up the winding path to the Acropolis past the Roman Dionysius Theater, built in the 5th century, I experienced a sensation of slipping back through time. I climbed up to the slippery marble steps for a magnificent view of Athens.

This city, the birthplace of Western civilization, has been continually occupied for the last 3,000 years. Well known to all from world history textbooks, the Parthenon is an awe-inspiring sight in person. A visit to the Acropolis Museum caps off the trip nicely and presents a number of interesting artifacts and statues.

Many travelers arrive in Athens intending to head straight out to the islands. But I would recommend two must-see spots before you depart: (1) the aforementioned Acropolis, including the Parthenon and the Acropolis Museum, and (2) The National Archaeological Museum, with its 20,000 exhibits presented in chronological order.

This may be the finest archaeological museum in the world and is certainly the best for Greek antiquities. Scattered throughout the museum are the collected treasures of the Ancient World. Memorable artifacts include the frescoes from the ancient town of Akrotiri on Santorini, the gold masks of the ancient kings of Mycenae, and the impressive Artemision bronze sculpture of either Zeus or Poseidon, which was found in the Aegean Sea. Set aside a full day, or at least an afternoon, and enjoy. It’s best to get here when the doors open to avoid the crowds.

There’s certainly more to see in Athens. The Plaka, below the Acropolis, is an old Athenian district popular for shopping and is also worth your while to explore. Once called the neighborhood of the gods by the Greeks, the Plaka is a bit touristy, but gives a feel of old Athens with its narrow streets and pedestrian walkways. I’d recommend staying here when visiting the city.

Explore the ancient and modern agoras; representing the latter is the Athens Central Market. Take a stroll (or the metro if you’re there on a hot August day) to Syntagma Square, a block from the Greek Parliament. I watched the changing of the guard near here at the Tomb of the Unknown Soldier.

But if you have limited time in Greece, don’t linger too long in Athens. Experience its magnificent history – then, head to the islands!