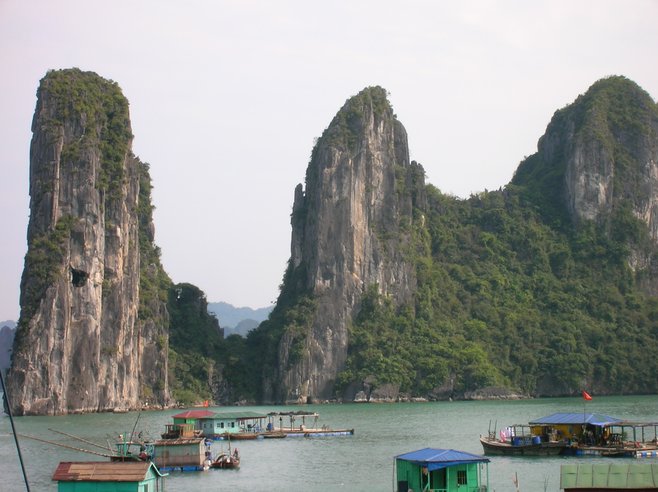 There are a million different tour companies taking foreigners through the bay with varying prices and packages, but they're all the same boats and go to the same destinations – exemplifying the Communism that exists in Vietnam today.

The accommodations on the boat are not cruise-like – more Treasure Island-style. Small rooms, average beds, but priceless views right out your window to watch the sun rise and set from. Traditional Vietnamese dishes are served on board along with bountiful alcohol and Pringles for happy hour cravings.

It takes a few days to get deep enough into the bay where you really feel as though you’re on another planet. A day or two, and all you see are the thousands of cliffs jutting out of the lagoon-colored water and nothing else. You forget which way’s east and west, and living on a houseboat with pet dolphins could easily be your reality.

We stopped on one island and spent the night in a hotel where we had a group dinner with the rest of our boat. Vietnamese like to be in charge, have things done a certain way, and don't understand independence, so we didn't get away with trying to hide away in our room enjoying some solace when dinner was served. It made me feel like I was on a cruise vacation where every minute of an itinerary is planned for you.

After spending so much time in Thailand, “the Land of Smiles,” I found a lot lost in translation with the Vietnamese. The language already sounds aggressive, and their body language and facial expressions tend to be serious and dominating. I felt like I was getting yelled at when someone was asking how dinner was, and the feeling went way beyond the obvious American guilt for Vietnam and our role in their history.

We did a hike into the jungle and took in panoramic views of absolute beauty. There were the usual colorful birds and monkeys as we trekked behind our sandal-clad guide in hiking boots and moisture-wicking shirts in a way that made us feel like typical tourist Americans. There was a supposed tiger on the island, but surprisingly, we didn't see it on our trek.

We cruised alongside the cliffs by day, stopping at colorful floating markets with every fruit imaginable and observing the various communities living on houseboats in this enchanted bay.

We kayaked one morning at sunset and it was the most peaceful, surreal time I've ever had. It definitely aroused the "Am I really here right now? Is this really happening?" out-of-body feelings that only traveling in a distant land can conjure up.