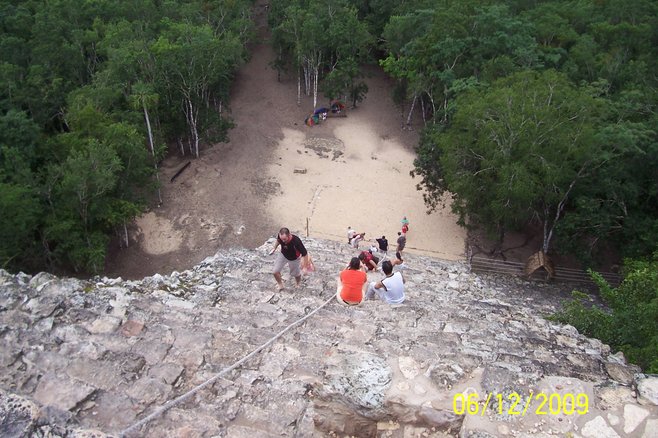 Fun and Games in Coba, Mexico

The site of pre-Colombian ruins on the Yucatan peninsula, Coba, reachable on a day trip from Cancun, was at one point inhabited by over 50,000.

Coba’s Nohoch Mul is the highest pyramid in the Yucatan (42m), and we chose this site as you’re still permitted to climb to the top. There’s a rope to assist climbers, but take care – it's a long, bumpy way down and the steps are uneven.

Cancun is about 130km away, and there are two roads in: the southern route is more modern, and there’s a more rural route to the west. Tour buses are available, although renting a car provides more freedom and photo ops. Watch out for the topes, or speed bumps.

There are several ball courts in the ruins – they were used to play a game involving the use of the hips, forearms or head to project a rubber ball through limestone hoops located high up on a smooth, sloped surface on either side of the court.

The local guides told me that the captain of the winning team would occasionally be sacrificed, as it was considered a great honor and some games lasted for weeks. The locals have a wicked sense of humor though, and I've seen conflicting reports about who gets sacrificed.

In any case, there’s a scull carved from limestone at mid-court, apparently to remind everyone that this was more than a game.