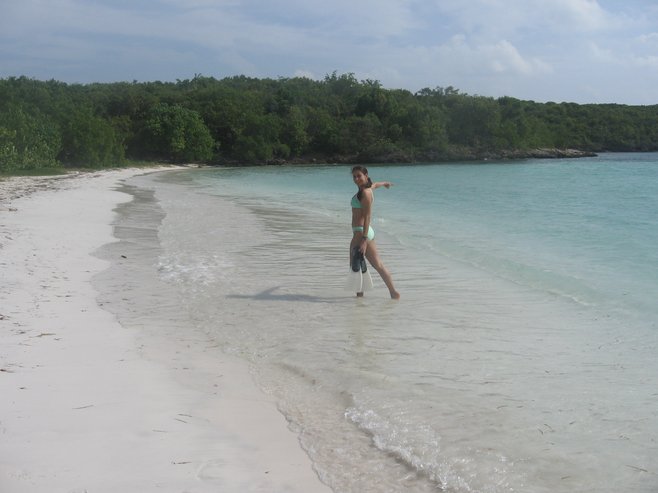 If you thought life in the Caribbean was laid back, Vieques, an island municipality to the east of the Puerto Rican mainland, takes it to the extreme. Most of the island looks and feels like the deep countryside of Puerto Rico. But Vieques is also a prime destination for beach hopping and eco-tourism, and might soon be known for educational travel.

Most tourists come to Vieques for the bioluminescent bay at night and the beaches during the day. Bahía Mosquito is perhaps the most magical, wondrous natural place on earth. On a moonless night it feels like bathing in stars, or like being kissed by light as you move. This place alone makes your trip to the Caribbean worthwhile. Besides Island Adventures, which offers an electric boat tour, Travesías Isleñas and a few others offer kayak tours.

After this magical experience, you can head to the malecón in Esperanza to grab a bite or fraternize with locals and visitors alike at La Nasa – perhaps the most informal spot among Esperanza bars and drinking holes. You’re almost guaranteed to find lively conversation and even make a few new friends.

During the day, Vieques is a remarkable destination for beach hopping, offering an unparalleled variety of beaches for an island its size. Although Playa Flamenco on the nearby island of Culebra holds more fame and a worldwide reputation, Vieques’ beaches are in no way inferior. Similar in size and atmosphere are Blue Beach (also known as La Chiva) and Red Beach (Caracas). Sun Bay is also worth a visit.

Finding and arriving at the more remote beaches can add to the sense of adventure, unless rain renders the roads difficult to drive on. In fact, my favorite beach in Vieques is among those better reached with a 4x4 vehicle.

Vieques has coral reefs, golden sand beaches, white sand beaches, a black sand beach, two Spanish-era lighthouses, a surf spot on its north shore and some off-limits gorgeous beaches that are undergoing their decontamination process. The island was once a U.S. Navy bombing range and testing ground, and some areas still remain off-limits. But even before its own cleansing is complete, Vieques can transmit that process to its visitors: it can wipe away your worries and make you feel free and renewed.

To get to Vieques, you’ll need to fly to Puerto Rico first, although a few small airlines such as Vieques Air Link offer flights from St. Croix.

Puerto Rico is aptly described as a “land of contrasts” and deserves a separate article, but a convenient stop on your way to Vieques is the town of Luquillo. While it doesn’t have much to offer except its beaches and the fact that it’s a preferred egg-laying spot for leatherback turtles, Luquillo is conveniently located between Río Grande and Fajardo, both of which offer unique nature reserves worthy of a stop before continuing on to Vieques. You can save money by staying at a privately owned condo such as luquillobeachfront.com, where you can sip a heavenly cup of coffee while gazing at a marvelous sunrise.

I recommend flying to Vieques (from Fajardo or San Juan) just to skip purgatory before arriving in heaven. The ferry, which offers an incredible value at $2.50 each way, is located in the unattractive town of Fajardo. The Fajardo terminal was in a sorry state (hopefully being renovated), with missing chairs, rusty metal, bees circling around, the lack of a proper ceiling and wooden boards covering half the waiting area.

Practical information about special events in Vieques can be found at viequesevents.net. A new language school, which can provide a good "excuse" for visiting Vieques, is also expected to open soon (centroidiomas.info).