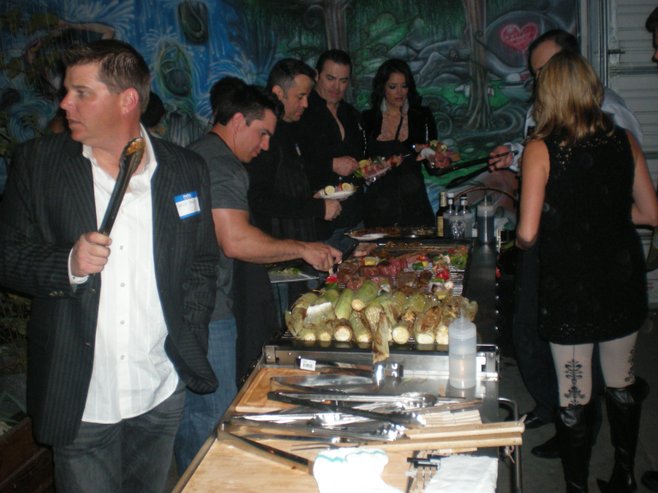 "You don’t know us, but we know you,” the text message read. “You are one of the selected few.” The message, from a Mr. Smith, gave the location of a South Park wine bar where I was instructed to go between 6 and 8 p.m., order a drink, and ask the bartender how he likes his steak. Mr. Smith called the occasion Fork and Dagger, only contributing to the aura of a Victorian murder mystery.

South Park was teeming with families, musicians, stilt walkers, and a street-side flea circus for the holiday walkabout. The Rose Wine Pub was busy, many patrons standing shoulder to shoulder as they talked and sipped from their glasses. I ordered a beer and uttered the magic phrase. The bartender handed me a serrated knife and a nearby address written on a tag. I put them in my bag and drank the IPA, wondering who among us was in on the conspiracy.

The address led to a North Park business, Home Brews & Gardens. Inside, only two others had arrived. One of them, Megan, had also sliced her hand on her steak knife while searching for something in her bag. We talked in the store front until maybe 30 of us made our way upstairs, where a small indoor garden with a hanging grape trellis sat next to three long tables set for a meal.

Bob Marley and Röyksopp played from the stereo. A pamphlet on our plates called the event an “underground supper club.” “Each of our events is unique and our venues always change,” read the pamphlet. “Our eclectic guest lists are compiled through personal referrals only.... Tonight’s dinner is focused around the communal art of grilling.”

Beneath the suspended grape vines, a pyramid of large ice blocks held raw cuts of rib eye, New York steak, and pork chops. Donning aprons, we grilled skewers of shrimp, chicken, salmon, veggies, and beef with cobs of husked sweet yellow corn. A man in a sharp suit countered his wife’s move to take a knife to her steak while it grilled.

“Cut it in half?” he objected. “And let all the passion out?”

He demonstrated how to test the readiness of the steak by putting your thumb and forefinger together and feeling the density of your thumb meat. Index finger is rare, pinky is well done.

Using the knives we had been given at the wine bar, we ate our meals with balsamic green salad, rolls, and baked potatoes. A selection of wines paired by 3rd Corner Wine Shop and Bistro sat next to a cooler full of beer selected for the occasion by the store’s in-house brewmaster.

The girls sitting nearby introduced themselves as Maverick, Ice Man, and Rick James. Maverick talked about her recent trip to the Art Basel exhibition in Miami, later stating, “I’ve been modeling since I was 16 years old and I’m over it! I’m a screen writer now. Like Quentin Tarantino.” Fork and Dagger, adapted for the screen by Quentin Tarantino. It was perfect.

At one point, everyone erupted into a chorus of happy birthday for one of the diners, singing twice in English and once in Spanish. Eventually, the store owner called the evening to a close for the remaining 15 guests. The store would be celebrating their one-year anniversary the following day with a beer garden, a chili cook-off, and bands.

Mr. Smith never introduced himself to the party. Very likely he was never there.

“Perhaps we’ll meet again,” the pamphlet concluded. “Even though we didn’t technically meet.” ■