Heymatt: Another cold, gloomy day here at the beach. Winter sucks. I’ve been trying to think of a cure short of moving to the Equator. It occurred to me that I could sleep all winter like the bears. I could leap out again in the spring and be ready to go, assuming I’m not shot by Sarah Palin. Why aren’t people hibernators? There’s nothing that goes on in the winter that is worth being awake for. — Sunshine Jim, P.B. 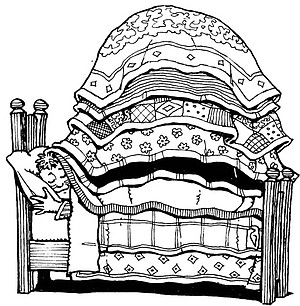 Hold on a minute. I’m trying to get out of my head the picture of you being beaten senseless by guys with skis and snowboards. Oops, and there’s somebody else trying to strangle you with a snowman’s scarf. Whew! They did a number on you, Sunny. Lucky for them, bad for you, the decision to hibernate or not to hibernate was settled millenia ago. Us human beans evolved from tropical ancestors in Africa, just the kind of environment you’d prefer. So, we never had the need to sleep away the winter, what with the temperate temps and the continuing sources of food.

Hello, Matthew: We all know dogs, cats, and other animals get fleas, but how do they originate? Do they just hang around outside looking for a customer? How do they mate? — Joseph Wayton, via email

First of all, we’ll talk here about cat fleas. That’s the usual kind of flea we find around here. But cat fleas aren’t restricted to cats; they’ll poke their noses into any likely warm-blooded thing. And probably the thing that annoys you most is that fleas are lurkers. They hang out, mostly unnoticed for a good chunk of their life cycle. And they have a four-part life cycle between itchy-bity stages. Boys and girls reproduce the usual sperm-egg way. Nothing unusual. But then the female starts cranking out eggs every day, day after day, all the while hanging onto a warm-blooded host and sucking away. (Unpleasant side note: in a flea’s saliva is a chemical that dissolves host skin cells, the better to drink you, my dear.) Flea eggs aren’t sticky, so they fall off your dog into the rug. Or the dirt or wherever. For a few days (assuming you haven’t vacuumed or used flea killer) egg transforms into larva, and larva chews its way out of the egg and starts eating the blood droppings of the adults or old Frito crumbs in your rug. After a couple of weeks of this, the larva spins a lovely sticky, silky coccoon that eventually gathers all kinds of debris from your floor. This pupa is still lurking not so very far from where the egg landed, probably. And it can stay in this stage for months, until it senses the vibration or CO2 from, say, your dog, and pops up as a full-on flea looking for an animal and a mate. Well, I hope that answers all your flea questions. You sounded like a truly baffled man. Fleas come from your rug, the dirt, the lawn, whatever’s laid out on the ground. Try a trip to the vet and a flea collar for whatever your pet is (assuming it’s not you with the flea infestation...), and try vacuuming. A lot. With flea-killing rug stuff.

Hey, Matt: What is the last name of Mario and Luigi from Nintendo’s “Mario Bros.”? These princess-saving, gorilla-fighting, dragon-slaying brothers have been entertaining me for the past 20 years or so, and I don’t know their full names. How is this possible? Are they like Cher and simply go by one name? — Jay

This huge gap in your knowledge collection results from not thinking clearly about the question. Old enough to remember the Smothers Brothers? How about the Baldwin Brothers? The Neville Brothers? Now apply the same logic to the Mario Brothers. Think maybe their names are Mario Mario and Luigi Mario? But how could this be? Mario Mario? Ridiculous! But in Super Mario Brothers, Mario introduces himself and his brother as “Mario Mario and Luigi Mario,” which should settle the argument. In Mario’s maiden appearance, in Donkey Kong, he was “Jumpman” and was a carpenter, but that didn’t last long. By Donkey Kong Jr. he was Mario. Can you still love him, knowing his name is Mario Mario? I hope so. Anybody hooked on a stupid video game should be able to get past almost anything.

HEY, MATT: Just wanted to play know-it-all, i.e.: Nov. 11, you told J.B. in China that C1 was midway between shoulder and waist. C1 (also known as the atlas) is the topmost vertebrae of our spines, as in cervical. They are followed by the thoracic (mid-back), lumbar (lower), sacrum (top of butt crack), and coccyx (tail). — Matt M.

Humph. Last time we use the elves as live models.