Matt, please: The other night me and my friends were partying up pretty well, and my girlfriend got kind of hysterical laughing at something and after a while she was staggering around saying she couldn’t breathe. Somebody went into the kitchen and came out with an old paper bag with grease stains on it and told her to breathe into the bag to get her breath back. She didn’t like the grease stains and didn’t want to do it, but her friend grabbed the back of her head and stuck her face into the bag and said, “Breathe!” She didn’t have much choice then. After a while she was fine, even though she said she thought she smelled like Swiss cheese. Why does it work for somebody to breathe into a bag if they’re gasping for air? I’ve heard about this before, but it doesn’t make much sense to me. — The Host, via email

Wow. Quite a shindig. Thanks for the details. Sorry we missed it, sort of. I hope she now knows she’s better off smelling like old deli products than being out cold on the floor. Her friend did her a favor, under the circumstances. It all has to do with blood chemistry, though, so I doubt that there were too many partiers who could have told you what was going on.

I can’t imagine what your girlfriend’s blood chemistry looked like when she got the breathless giggles, so we’ll just explain this as if it were just normal. Not likely, but what the heck. So, assume her blood had a nice, neat acid/base balance. Not too much carbon dioxide, not too much bicarbonate. When these two get out of balance, blood goes either too acidic (too much carbon dioxide) or too alkaline, and something needs to be done. 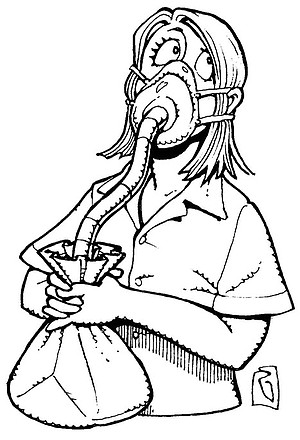 In your girlfriend’s case, she was hyperventilating (breathing too fast). Since we exhale carbon dioxide, she was depleting this from her blood through her lungs. Consider these repair choices to bring blood acids and bases into balance: (1) wait for her kidneys to make the proper exchanges of bicarb; (2) slow her breathing rate; (3) inhale a bunch of CO2. The fastest fix is to suck up carbon dioxide. How to do this kinda on the fly? Breathe into a bag, which will capture the CO2 she breathes out and then allow her to suck more of it in again. Blood exchange through the lungs is faster than exchange through the kidneys, so she’s up and partying again in no time. The greasy bag just created a mini CO2-loaded atmosphere.

Hey there, M.A.: I have lots of large rosebushes but one particular freaky one: a yellow tall rosebush was growing what I thought were kumquats! I called the smartest man I know, my Pop, and he said only way possible for that is if someone grafted a kumquat tree to rosebush. I then found out these little orange balls growing are rose hips. So, here’s my question: Is it rare for a rosebush to produce rose hips? Are rose hips not an ingredient in, say, face creams, etc.? Can I cut open those suckers, market them, and be rich? — Kelly Gleeson, Mission Valley

You’re maybe a millennium out of touch with the rose-hip world. They might have been shockers to you, but roses grow, hips follow after the bloom has died. It has always been this way. Hips — round and red, oblong and orange, many shapes and colors — are the rose’s fruits that contain the rose’s seeds. Cut them open and make a fortune? Only if you can think of some use other than what’s already out there: tea, soup, pie, rose oil, perfumes, vitamin C supplement, jelly, jam, alcoholic drinks, animal feed, potpourri, rosewater syrup for Middle Eastern desserts like baklava, and medicine for colds and arthritis.

Hey, Matt! What’s up with the measures of rainfall? I understand that some sort of vertical-sided test tube is used to measure rainfall. But I have much more water in flowerpots, wheelbarrows, etc. in my backyard after a rain than the weatherman reports. How can I have four inches of water in a wheelbarrow when it only rained half an inch last night? — Mark from Carlsbad

Rain collected in one standard rain-gauge tube probably doesn’t give a true reading of how much rain has fallen in a given area around the gauge. Rain is caught in a funnel, then runs into the tube, so the number you get reflects true rainfall over only a few square inches. But your wide-open wheelbarrow doesn’t give a useful number because there are no other wheelbarrows to compare it to, unlike standard rain gauges. The wide-mouthed barrow collects more water than the gauge. An areal reading of rainfall — the mean value of several rain gauges over a specific area — is also a little wacky. Say your five gauges read .55˝, .87˝, 5.40˝, and 2.33˝, the mean is 2.21˝, which probably seems all wrong if you live close to the .55-inch gauge. So, rainfall numbers are relative. Comparative. The gauges need to be standard.