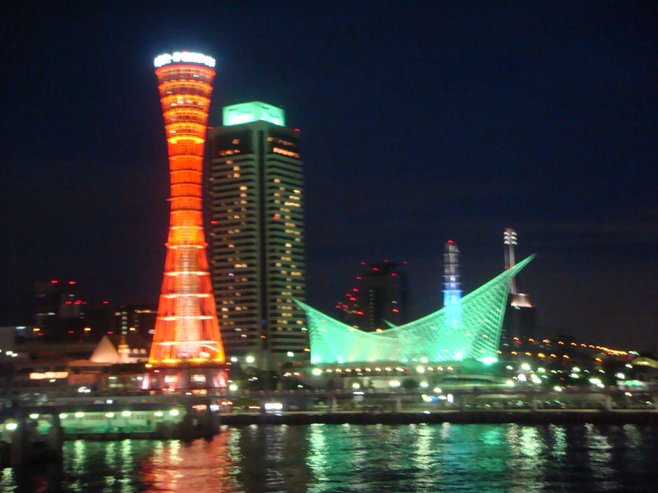 While Kobe is most commonly known for its tender, succulent cuts of beef, it’s also famous for its remarkable recovery after the Great Hanshin-Awaji Earthquake of 1995. This massive earthquake, which reduced the city to rubble, took Kobe a mere decade to overcome. Visit Kobe and the only evidence of the earthquake’s destructive touch you’ll find are memorials and museums commemorating the catastrophe.

Among the reconstructed city’s thousands of buildings is the Kobe Port Tower, which completes Kobe’s signature skyline. With an observatory and harbor views, the 108-meter hyperboloid structure is undoubtedly the city’s most famous landmark.

Kobe Port Tower is located near the harbor in Meriken Park. The Park was devastated in 1995, but has been fully restored since. Other notable buildings in Meriken Park include the Maritime Museum, Hotel Okura Kobe and Kobe Meriken Park Oriental Hotel.

Kobe Harborland is a shopping, entertainment and tourist hotspot. Located along the city’s port area, these waterfront cafes, restaurants, shops and amusements (including a Ferris wheel) are sure to please.

Kobe’s Nada district is known for its sake production — in fact, the Nada district is the world’s top producer of the famous Japanese libation. Visit the Hakutsuru Brewery’s Sake Brewery Museum for a thorough sake education and sake samples.

Leaving the city without trying its signature beef is a Kobe faux pas. Kobe has a large assortment of Kobe beef restaurants, many of which are excruciatingly expensive. Try A-1 Restaurant for an authentic, high-quality, reasonably priced Kobe beef meal. The cozy eatery’s cooks serve their beef cooked just how you like it, complete with A-1 bibs.