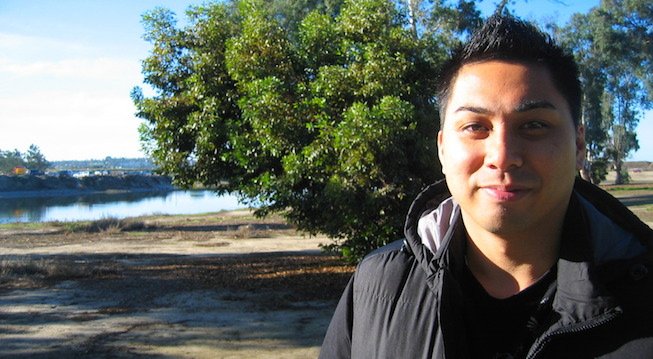 Originally from Wahiawa, Hawaii, Jureyl recently moved to San Diego and pointed out some key differences between surf cultures.

“In Hawaii, the water is so blue and clean…it’s warm all the time. We don’t have to wear wetsuits. Here, the water is kind of gross. There is tons of seaweed, and it’s cold, even in the summer. Surfing and living in Hawaii is kind of like living in a vacation.”

Some San Diego beaches have locals that confront nonlocals. Jureyl says that in Hawaii it’s even more severe.

“The locals are very protective of their beaches. I have seen lots of fights in the water. It is a pretty mellow place most of the time, but the worst thing to do is cut someone off. I saw a guy get angry at another surfer for cutting him off, and he cut his leash and threw his board into the water. I’ve only come close to one confrontation, but my uncle was with me and he helped me out.”

Jureyl started surfing at age 11. He lived just a ten-minute hitchhike from the beach, and learning to surf was a natural thing to do. An accident seven years ago almost stopped him, though.

“A good friend and I were surfing at Waimea Bay. During the winter, the waves can get huge, as tall as 50 feet. That day, there were 10- to 16-foot sets rolling in. My friend tried to go over a wave and it got ahold of his leg, slamming him into the sandbar. He got caught under. The impact broke his back, and he was bedridden for a long time. A couple of months after that, I almost drowned. It was the same scenario, except the wave pinned me under. It was like being caught in a washing machine.”

Jureyl says that the key to surviving when trapped underwater is to stay calm and conserve oxygen, allowing you more time to find your way to the surface.

“I managed to get out after a set of four passed over me. I just sat on the beach and contemplated my life. I do continue to surf, but I am definitely more careful now.”