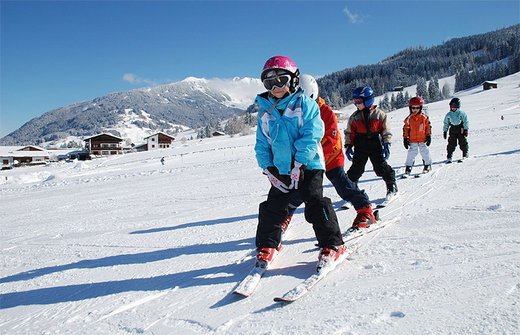 Austria’s Christmas (Weihnachten in German — literally, "Solemn Nights") starts officially on the fourth Sunday before Dec. 25. This is the beginning of Advent, traditionally a time of fasting but today a period of boisterous merry-making.

During these weeks, the central plaza of each city countrywide is transformed into a zone of festivity. Here, one finds artisans offering their wares, vendors selling a variety of Austrian food and drink, carnival rides for kids, live music, and, of course, carousers and revelers drinking beer and Apfelmost (a strong cider).

At home, Advent is observed with a bit more solemnity. Each Sunday evening, the family comes together to light an additional candle on the Advent wreath.

Dec. 6 marks Nikolaustag, the day of St. Nikolaus – or as we know him in America, Santa Claus. His mission is to reward well-behaved children with gifts and candy. The misbehaved are left to the Krampus to punish. Interestingly, it is the Krampus who commands center stage at the public celebration of Nikolaustag. In fact, an entire army of Krampuses runs noisily through Austrian cities, batting the backsides of hapless victims and converging on the central plaza while St. Nikolaus calmly watches from a horse-drawn carriage or emcees.

Christmas Eve in Austria is observed quietly. The candles of the tree are illuminated, and everyone gathers around it to sing. Presents are exchanged around midnight.

The next holiday of the season is, of course, New Year's Eve. The arrival of the new year is often celebrated in unmistakable Austrian fashion. At midnight, following a champagne toast, celebrants pair up to dance the first waltz of the year. It’s lovely to see an entire household dancing to the music of Strauss.

With the beginning of the new year, there are two principal holidays that remain to the season: Three Kings Day on Jan. 6, the celebration of the three Magi who visited the infant Jesus; and Lichtmesse (Light Mass) on Feb. 2, a church Mass illuminated by dozens of candles as a sort of final celebration of the season's light, as well as the presumably Pagan bonfires that people often try to jump over.

Although the holiday season officially ends after Feb. 2, Austria feels festive for the rest of the winter, since Austrians wholeheartedly enjoy skiing and one often sees kids as young as three riding safely with their parents' assistance. I always felt clumsy on my skis after seeing minuscule Austrians maneuver on the snow with such skill. There always seemed to be a ski lift within reasonable distance from anywhere in Austria, a country where downhill skiing is watched with fervor comparable to American football in the United States.

Young adults with a bachelor's degree can experience the festivities firsthand by spending a year in Austria as English Teaching Assistants to Austrian high school teachers. For more information, contact the Austrian-American Educational Commission at fulbright.at.