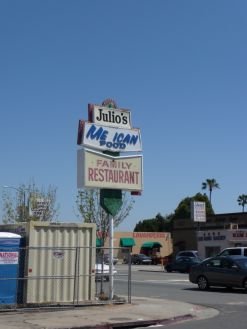 All that remains of Julio’s Mexican Restaurant is the tall sign at the corner of University Avenue and 45th Street.

Julio Arreola and his brother Olimpio ran the restaurant for 35 years before they lost their lease and closed the business in July of 2006. In the weeks before closing, Julio told customers that they had originally owned the property but had sold it years ago and leased it back. He said the new owners had resold it and that a pawnshop would replace the restaurant.

The pawnshop used the restaurant building and operated for about a year before having a clearance sale in 2008. Even while the pawnshop operated, the sign remained.

The building stood empty for several months and was gradually dismantled. The walls were knocked down during the first two weeks of April 2009.

A demolition worker at the site said he had no idea what would be built there next.

I clean awful apartments, I move divorced couples, I was Vons janitor
Next Article

All that remains of Julio’s Mexican Restaurant is the tall sign at the corner of University Avenue and 45th Street.

Julio Arreola and his brother Olimpio ran the restaurant for 35 years before they lost their lease and closed the business in July of 2006. In the weeks before closing, Julio told customers that they had originally owned the property but had sold it years ago and leased it back. He said the new owners had resold it and that a pawnshop would replace the restaurant.

The pawnshop used the restaurant building and operated for about a year before having a clearance sale in 2008. Even while the pawnshop operated, the sign remained.

The building stood empty for several months and was gradually dismantled. The walls were knocked down during the first two weeks of April 2009.

A demolition worker at the site said he had no idea what would be built there next.

Back into the light
Next Article

As recall race heats up, candidates choose their mascots

O I am so sad to see this pathetic restaraunt go to puts. Oh well, there's about fifty more of them all around the corners!

You obviously never ate at this fantastic San Diego icon. My favorite dish was the "super nachos" with loads of thick bacon and homemade guacamole. In the 1980s while a student at SDSU my boyfriend and I would go out once a month here. They had great food, super friendly staff and a live mariachi band. Great Memories. I am sad to hear it is gone- but it will be forever in my fondest college memories. Thanks for the update. Another great place to eat back then was Etna's Italian restaurant- I think it is still operating.

Being long time customers for 30 years, Julio's Mexican food is sorely missed by our family. The building was definitely run down but the food was quality all the way to the end!

For those that remember Mario, he owns his own restaurant now. Casa Adams on 30th and Adams ave. While nothing can live up to Julio's, this place comes very close. Go check it out.

One of the things I miss most about San Diego is good Mexican food! I haven't found any in Massachusetts yet, though I have tried. Julio's brings back memories...thank goodness there are so many other decent places to take its place. I am so very homesick!

My introduction Julio's was in 1972, as a place to get lunch when working in Mission Valley. I think they had some lunch specials for as little as $1.49. But the food was good, or I was unusually hungry.

The service? Not the greatest, usually perfunctory. I got raves from folks who said they didn't like Mexican food, yet loved Julio's tacos. The carrots were great, cooked just enough to be soft, not too piquante, and refreshing. Many of these Mexican restaurant recipes have changed over the years, and not always for the better. It was there that I discovered pork chile verde, and it is one of my favorites still.

That neighborhood was never the best, and has declined over the years. A car repair shop was right next door, not a pretty sight.

I liked the place so much that my wife and I had our wedding rehearsal dinner there, in late 1974. I trusted Julio enough to take family and friends there, and all seemed pleased. The strolling musicians kept the place festive. I'd often wondered about his success if he had located in some tourist area. But he was what the neighborhood allowed him to be.

Sorry, but there are not fifty places just like Julio's, maybe not one. It was unique, and after moving to north county, we seldom ate there. I wish I could find a sit-down Mexican restaurant half as good within ten miles of my home.

Julio's was remodeled not long (a year or two?) before it closed. (A paragraph concerning this was deleted from the original story.) In addition to the usual paint and upholstery, a mural of a Mexican pyramid was added to the inside rear wall. It was a shock when they lost their lease so soon after redecorating.

A number of other great and cheap places to eat have been lost over the years. Don Jose's on El Cajon Blvd, across from Hoover High was unique, and for several years had a second restaurant on Convoy Street in Kearny Mesa. There was Caesar's with three locations, which shrank to two, and finally to only one. It had some Italian tastes that can still make my mouth water, and the last one of those (in Mission Valley) closed about 25 years ago. Oh, the Campus Chuckwagon on El Cajon Blvd, with its $1.35 full lunch buffet is but a memory for SDSU students in the 60's and 70's. The Bit of Sweden smorgasbord on El Cajon Blvd at Oregon St was a fantastic value in the early 70's. There must be some operations around today that compare to them, but they were so CHEAP, had lines out the door, and did booming businesses.

Linda, thanks for the memories.

has anyone ever been to el juan's in chula vista? i think it has been there for like 60 years, great food, killer margaritas, and the chips the serve are made of flour tortillas, very light and crispy, not hard and crunchy like the cardboard ones you get at other places. i loved the atmosphere. is it still there i wonder...

El Juan is still there.

What happened to Sir Georges? I swear those places had way better food than Home Town Buffet.

oh wow...i totally remember sir georges. on university in la mesa right? mmmyeah..better than hometown buffet. it was like a purple castle, wasn't it?

Sir George's morphed into a great Vietnamese restaurant(Trang Anh?) - best prawns I've ever tasted - that was in the late nineties - don't know what's there now.

A two-story commercial center is replacing Julio's. Framing was completed and tarpaper and windows were added by the third week of July. The old Julio's sign was finally covered up the first week of August. It looks as if a financial services business will be opening there.

The Julio's sign, which stood for so long after the restaurant closed, was finally removed, pole and all, in the last days of August 2009.

The new commercial center has been open for several weeks. Two of the suites are occupied by a pawnshop and an insurance agency.

In the past couple of weeks, another business had been added to Julio's former site: a pharmacy.

Yikes! I'll be in town this weekend for the San Diego-Dallas game and was hoping to eat at Julio's. "Visduh"'s comments (April 23, 2009 entry) bring back so many memories of good eating. Everyone in my family were regular guests of Don Jose's (Mr. Joe Ross, if memory serves) from their original location at 35th and El Cajon through the end when the second owner closed the stores. There was never an equal to Don Jose's. Does anyone have their recipe's? One of my friends single-handedly introduced many people from the LA audio recording community to Don Jose's. Several of them were known to make repeatedly make the trip just to eat there! After "Jose's" closed, Julio's became our favorite. My parents absolutely loved Bit O' Sweden. While Caesar's was great, don't forget Nicolosi's, nor Lido's in Lemon Grove. How about Oscar's both locations)? Thanks for the memories, San Diego!

Julio being closed deeply sadens me.The last time I was there was in 1991 for my son's wedding reseption.I was planning to give my son a 20th anniversary gift to Julio's but now I have to re-think of my plans for a gift. I installed the speaker system in the restaurant in the early 70's,the attic was no fun place to crawl around in, and the brothers were so grateful that I never had to pay for my lunches when I stopped in(at least once a week). Living in Michigan since 1979 I have never forgotten the fine meals that I had there. I have searched and searched for the fine food here in Michigan that Julio had but only found one in Taylor that was close but not quite as good, even tried mexican village(not even close). I guess now, there is no reason for me to go to San Diego(sorry son).

I was so sad to run across this article-My Dad sold the building to Julio and his brother in the 70's. This restaurant was a family favorite for many years. We celebrated birthdays,pre-weddings, homecoming dances, proms at this wonderful place. Julio was always there and made it a point to come and say hi and always made a special crispy quesadilla for my brother and I (we didn't even have to order it) Another part of my childhood in San DIego is gone-but the memory of the food, fun, Julio,and Joe in the kitchen will live in my heart forever!