After a sliver of success from his 2005 release Little District, Mike Pinto embraced the island sound and Southern California life, moving to Ocean Beach from Philadelphia.

For his November 2007 self-titled album, Mike found drummer/guitarist Chuck Treece, a session player who has toured with Bad Brains and Urge Overkill. The accomplished musician’s addition to this record can be felt in the high-quality snappiness of the sound. 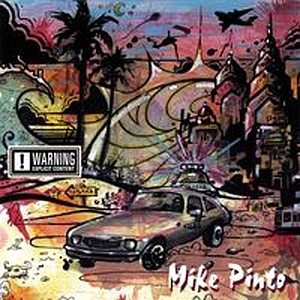 Granted, Mike plays beach-jam music — the same as dozens of other bands in the area — but his emotion-laden voice (best heard on “Backburner”) and classic-rock inspired guitar riffs (featured prominently on “Get Me Down” and “Full Speed”) set him apart from the usual Wednesday-night-at-Winstons reggae-inspired surf rock.

Thankfully, Mike avoids affecting a fake Jamaican accent, and instead of the standard weary lyrics of marijuana usage and dancehalls, he employs catchy writing to deliver stories, not unlike hip-hop. His best lyrics come on track eight (“You could cut the tension with a dull machete”) and track three (“My sound’s hotter than your upstairs attic”).