Where available/price: Taang! Records downtown, Thirsty Moon in Hillcrest, and M-Theory Records in Mission Hills for $8

Songs: 1) Old Lies Told Well 2) It’s the Blues 3) Waiting on a Miracle Ain’t Like Waiting on a Train 4) Hit It in Your Guts 5) Tell Yourself

The local-band amoeba splits and reforms again, this time with former members of Vinyl Radio and A Week’s Worth. Singer Matt Binder and bassist Erik Visnyak founded Hotel St. George last fall, and the band has since shared the main stage with the solid local boys in Writer as well as perennial threats to national breakout, Louis XIV. 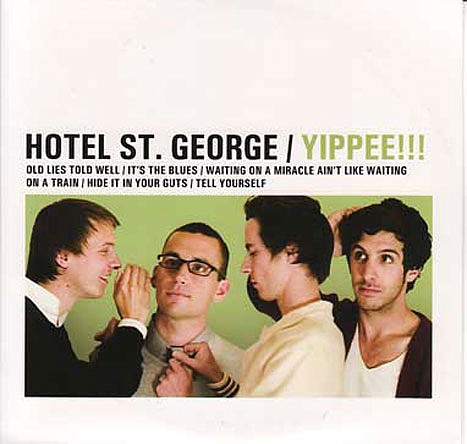 Hotel St. George combines punch-in-the-gut garage-rock guitar work with fierce glam vocals — simple and tasty. In the horse race to see which indie act signs a contract first (…the Frantic Romantic on the inside, around the corner comes the Modlins, and down the straightaway trots Roxy Jones…), Matt Binder’s Bowie-esque voice might put Hotel St. George out in front by a nose.

While the band shows grit and dedication, their arrangements may be too simple for record-label attention, and that may keep them on the Casbah’s Sunday-night list instead of heading out on a summer tour. So, until the eventual breakup and regrouping, enjoy.