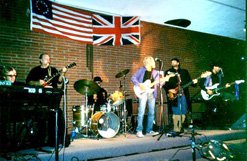 The Electric Prunes are best known for their 1966 hit “I Had Too Much to Dream (Last Night),” a great song and a fantastic example of psychedelia kitsch. With its backwards-playing guitars and unusual echo effects — not to mention its wink-nudge drug references — it’s practically a template for much of the rock ’n’ roll that would follow it for the next year or two. The follow-up single, “Get Me to the World on Time,” is good, too. It should be: Like most of the Prunes’ songs on their first album, it was written by professional songwriters Annette Tucker and Nancie Mantz, and some of the instruments on the recording were reportedly played by producer Dave Hassinger.

To be fair, the guys in the band did apparently play the majority of their parts, they played live, and they wrote more of their own material later on. A notable exception would be the Prunes’ final studio album, Mass in F Minor, which was a concept album that set Latin prayers to a combination of Gregorian chant and psychedelic rock. You can’t make this stuff up! A single from the album, “Kyrie Eleison,” ended up on the soundtrack to Easy Rider.

But I think my personal favorite Electric Prunes recording is a radio commercial for the Vox wah-wah pedal in which an overexcited announcer exhorts the band to “Play it, Prunes, first without the wah-wah pedal! Now listen to the difference when you push that Vox wah-wah pedal down!” It would be cool if the reunited Prunes tracked down that guy and took him on tour.