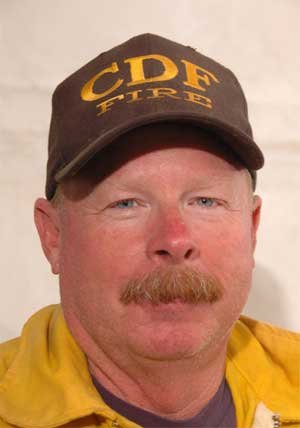 Here at Gillespie Field, Rick Buffington is king. The king of supplies, anyway. Hank and I are standing beside his little electric wagon in the Thursday evening gloom. The guy reels off order after order into a cell phone. The landlines are down. Somewhere behind him, you hear fwop fwop fwop: two Huey choppers coming in to land. Here, cops, sheriffs, state forest flight crew, mud-spattered firefighters, and lines of prisoners in orange tunics all criss-cross between us and the chow tent.

I'm waiting to see if it's cool for Hank and me to grab a bite here. Even though we're not fighting fires. This was late last week, and Hank had to bring video equipment to a firefighting buddy of his. I came along for the ride. Here we are in Base Camp, an instant tent city, population maybe 1000. The place is filled with rows of sandy-colored square tents, laundry trucks, phone-bank trucks, red fire-crew trucks, and fire engines.

"Food?" says Rick. "No problem. This crew here is the best. The only female forest service kitchen in the state."

We head off for the CDF chow trailer. "California Department of Forestry and Fire Protection," says the sign above the lit windows. "Emergency Operations Support Kitchen." I spot a chalkboard. Ah -- the menu. "Roasted Chicken Halves, Asian Veggies, Rice Pilaf. Or Vegetarian Upon Request. Enjoy Your Dinner."

"One chicken, one vegetarian," I say to a gal in an orange jumpsuit behind the tiny window. The veg, of course, is for Hank.

We carry our trays across to another tent, where bright lights shine down on salads and desserts. Three orange-jumpsuited girls keep the food replenished. Guys ahead of us pile on the lettuce and tomatoes and mushrooms and add a plate for desserts -- lots of fresh fruit, including pineapple, grapes, strawberries, melons, and peaches. And. Ooh yeah, baby: Creamstyle cheesecake. It's a brand. Individual slices in plastic wrap. I decide to come back for this-all later.

"We shouldn't be eating their food," Hank says again. "They've been fighting fires all day. What da heck have we done?"

"Seems to be plenty," I say. "And look at it this way. We get to meet all these guys and gals who put their lives on the line. Probably had plenty of their own company by now, day and night, strangers in town, some of them, stuck out here in their own bubble."

We pick up a couple of Gatorades from ice coolers out in the dark on the grass and head for a huge, brightly lit, open-sided tent with rows and rows of tables. "Wow," I say. "They could fit 600 people in here." Straw has been laid over the dirt floor. Maybe a couple hundred people are chowing down. You hear talk in everything from English to Spanish to Somali. We find two seats.

"You take the vegetarian," says Hank. "Not up to all that pasta. Carbs." He's already ripping the breast meat off the half-chicken stretched out on his plate. "Oh, yes," he says. "Has to be garlic in there. Those ladies know good cookin'."

I cut into "my" pasta. Inside these pasta shells -- oh, yeah -- ricotta. Savory, quite delish. Sure helps the steamed broccoli and beans and rice pilaf go down.

Hank finishes his chicken in three giant gulps. He heads out to find his buddy and hand off equipment. When my plate is clean, I head back to the dessert/salad tent. The three orange-jumpsuited girls are having fun making up pizza boxes. They tell me working for state forestry should reduce the time they serve by up to a third, but there are other reasons they love it. "We're actually helping out. It feels good," says one gal who gives her name as only "E." I get a paper bowl and fill it with grapes, pineapple, peach slices, melon, a couple of strawberries, and a chunk of that cheesecake.

When I get back to the table, CCC kids -- the California Conservation Corps, also here helping -- have already cleared away the entrée plates. I chomp into the fruit. All of it's nice and fresh, or freshly thawed. And the cheesecake? Yes, it's commercial, but sweet, tender, not cloying.

I get to talking with a group of guys who've come down from Lassen-Modoc, close to the state's northern border. They're finishing up their chicken. "As fire food, I'd score it a six and a half," says David. He and two of the other guys, Aaron and Jesse, are CDF captains. They direct helicopters on their fire runs, either on board or from the ground. The fourth guy, Bob, is a pilot. Flies Hueys. Has since 1970. Vietnam. "Our Huey is a 1969 model," says David. "But their payload's still bigger than the other single-rotor choppers," says Bob. We talk about flying through smoke, knowing where the fire is, where the other choppers are, where the mountains are. Scary stuff.

"Got to get this guy to bed," says David. He's talking about Bob. Rules say pilots must have ten hours' rest between operations. Preflight's at 7:00 a.m. They all head off to their sleep tents.

Me, I wander through to -- ulp. Half a dozen prone bodies in a shadowy tent next door. Fully clothed, of course. Women work over them, kneading their shoulders, heads, backs, legs. A deep moan comes from one guy. Another, lying face down, talks quietly about home. "Massage by Patricia and Friends" says the sign on the tent flap. When Patricia sees me looking, she says, "It's just something I thought I could do." She's cool, cute, and a licensed masseuse. "Some of these guys have been out there for three days, no rest," she says. "They come in tense and tight. In their heads, they're still facing that wall of fire. After we've worked on them, at least they can sleep."

Hours: All hours of the day and night