Peer down upon the west-side San Fernando Valley from the high perch of Castle Peak's summit.

Topped by craggy blocks of white conglomerate rock, Castle Peak affords what is probably the most expansive view of San Fernando Valley's west side. From the top, a sea of ground-hugging subdivisions is seen lapping at the foot of the mountain and stretching toward a vaporous horizon. In the middle distance, a bevy of skyscrapers at Warner Center rises up starkly, symbolizing the valley's evolution toward what promises to be a more vertical type of metropolitan environment in the decades to come.

To the Chumash Indians living in the Simi Hills centuries ago, Castle Peak was known as Huan, a gigantic monument (some say) that was used to keep track of repetitive celestial and earthly cycles. Every year during the winter solstice, Huan's pointed afternoon shadow swept across a Chumash village located near the mouth of Bell Canyon. Even today, there's a sense of timeless drama on Huan's summit as you watch the afternoon shadows of the Simi Hills stretch across the urban plain.

Although Castle Peak's summit can be reached from all sides, the shortest and most direct route is by way of the southeast slope. To get there, exit Highway 101 at Valley Circle Boulevard, and drive three miles north to Vanowen Street, a major east-west street in the valley. Turn left and go just one-quarter mile to where Vanowen meets Sunset Ridge Drive. Pass through a gate into what is known as El Escorpion Park, and follow an old dirt road going west into a broad, oak-dotted canyon. Stay right where the road divides into two parallel branches, and right again on a steeply inclined path heading straight up toward Castle Peak's craggy summit. Some 650 vertical feet of scrambling (and slipping here and there) gets you to the highest outcrop.

Hawks and ravens patrol the air spaces above (and often below) you, as you survey the landscape. If you wish, you can follow the trailless ridgeline west to peak 1639 for a better view of the rolling Simi Hills to the west.

This article contains information about a publicly owned recreation or wilderness area. Trails and pathways are not necessarily marked. Conditions can change rapidly. Hikers should be properly equipped and have safety and navigational skills. The Reader and Jerry Schad assume no responsibility for any adverse experience. 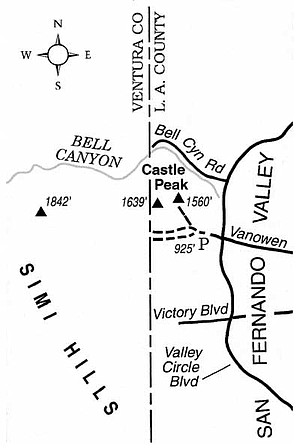