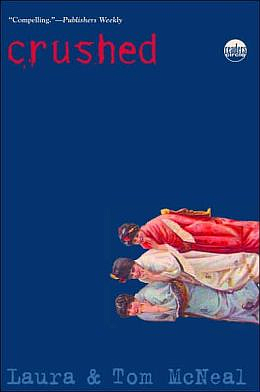 FROM THE DUST JACKET:

The acclaimed authors of Crooked and Zippedbring their signature suspense and razor-sharp dialogue to this compelling new novel about love, friendship, and the crushing power of secrets.

WHAT THE CRITICS SAY:

Kirkus Reviews: Audrey, Lea, and C.C. are a tight-knit trio, having just transferred from an alternative private school to Jemison High. The three friends are highly intelligent and lack patience for superficial cliques, which is why Audrey can't believe it when debonair Wickham Hill asks her out. Shortly after they begin dating, however, an underground gossip rag called The Yellow Paper surfaces, brimming with dredged-up secrets and skeletons in the closet. Clyde, a quiet and thoughtful classmate with a crush on Audrey, discovers that Wickham has secrets of his own. When he tells Audrey about Wickham's past, she assumes Clyde is the yellow journalist. Unfortunately, Wickham isn't the only person in Audrey's life with secrets; her father's fledgling -- and failing -- business eventually results in their home being repossessed. As the story builds to a climax, the author of The Yellow Paper is revealed, and Audrey learns who her true friends are....

School Library Journal: The characters in this novel have their secrets and make false assumptions about others, causing them all to be "crushed" in some way. Audrey's mother died when the girl was young, and her father is in financial trouble. Clyde's mother is dying of cancer. Wickham, born of an affair 18 years earlier and new in town, is running from his own secret. The trouble begins when he romances Audrey, who is quickly taken with his seeming sophistication. Painfully shy Clyde also has a crush on her and uses his father's computer program to investigate Wickham's past. In the meantime a slanderous paper is circulating secrets about students and teachers. Characters and situations ring true. Readers will sympathize with these individuals, some of whom mature, and some of whom do not. This quiet, sophisticated story will appeal to a small, mature audience.

Laura McNeal is a graduate of Brigham Young University with a master's degree in fiction writing from Syracuse University, and she taught middle school and high school English before becoming a novelist and freelance contributor to the San Diego Reader. Tom McNeal graduated from the University of California at Berkeley and was a Wallace Stegner Fellow and Jones Lecturer at Stanford University. His prizewinning stories have been anthologized, and his novel Goodnight, Nebraska won the James A. Michener Memorial Prize and the California Book Award for Fiction. Together, Laura and Tom are the authors of two novels set in the same town as Crushed andCrooked winner of the California Book Award for Juvenile Literature and an ALA Top Ten Best Book for Young Adults, and Zipped, winner of the PEN Center USA Literary Award for Children's Literature. The McNeals live in Fallbrook with their two children.

A CONVERSATION WITH THE AUTHOR:

People often ask if our main characters are based on ourselves as teenagers -- if I am Audrey Reed, for example. My response this time around is, "Not at all!" When Tom answered the same question, he said, "The rough model for Audrey was Laura, at least the adolescent I imagined Laura to be." One of the best things about writing a novel is that you don't have to be yourself in it, and one of the best things about Tom is that he idealizes the people he loves. Perhaps that's why, when Crushed begins, Audrey has the things I merely longed for: a private education, bookish friends, and a beautiful old house. She moves to a new school and she brings her bookish friends with her. She doesn't try out for cheerleading, and she doesn't care whether the cheerleading, dancing types at the public high school like her.

When I was in Audrey Reed's position as the new girl, I was 13 and living in South Carolina. I was without friends, without sense, and without (it appears to me now) shame. I practiced cheers as I walked around the house. In the driveway, in parking lots, in the kitchen -- whenever I felt myself unobserved -- I held my arms out straight, then tucked them back into my chest for a swivel and drop to the side. " First in ten, Do it again," I chanted in my head, not knowing, until I married Tom, that the actual phrase is "First and ten." Sometimes my brother watched me throwing my arms around and said I looked ridiculous, but I didn't believe him. On and on I went, up the front walk and down the hall, my arms snapping and turning, my lips moving to the words of a cheer.

When I spoke out loud, I had a drawl. You would have thought, from my accent, that I'd been born in the South, though we'd recently moved there from small-town New Mexico, where girls did 4-H and rodeo and wore Wrangler jeans. The girls at my new school wore monogrammed sweaters, 14-karat gold add-a-bead necklaces, Izod shirts, Izod pants, and Izod socks. My mother rightly had no patience for this, and no money for it, either. As far as she was concerned, we could either go on sewing most of my clothes, or I could wear the J.C. Penney fox. I saved my babysitting money, and I waited for deliverance.

Specifically, I waited for deliverance from that merciless stretch of asphalt behind the school where students stood like prisoners before the first bell, noticing, because there was nothing else to notice, who was friends with whom. To stand alone in such a place was unbearable to me, proof of my untouchability. Somehow, a girl I had met at summer camp introduced me to Becky Bradham. Becky touched my light brown hair and said that it reminded her of honey. She said she was going to call me Honey, and she invited me to her birthday party. After that, girls in her group wrote notes to me reporting what Skip Sauter said to Jim Barrineau, who was going to Lisa Donzalski's party, and what we were going to wear to the seventh grade dance. They all signed these notes with BOFA (Best of Friends Always) or LYLAS (Love You Like a Sister).

Lisa Donzalski, a chubby girl with a nervous laugh, called me every day after school to ask, "What are you going to wear tomorrow?" Then she would tell me, specifying color and brand, exactly what she was going to wear, changing her mind only if I was going to wear something brave, like a skirt.

I knew that this was a level of desperation that spoke ill of us. There was something wrong with us, but I didn't know how to fix it. Someone brought The Official Preppy Handbook to school, and we all read it. We were so incapable of irony that we believed it was a self-help book, not a satire. We studied the line drawings of people named Muffy and Biff who had houses in the Hamptons and sailboats and docks on which to wear Dockers, and we saved our babysitting money so that we could be, as the book promised, "really top drawer." Each time the clasp of Lisa's add-a-bead necklace worked its way to the front, I would point to it and tell her, "Make a wish." She would kiss the clasp and pull it back around until it touched her vertebrae. We did this because it was the custom, the way we lifted our feet going over the railroad tracks in a car, the way we wore hot pink with green, the way we wished, mindlessly, fruitlessly, to be really top drawer.

On weekday afternoons at Alice Drive Middle School, a sad-eyed, gray-haired woman tried to teach us the nature of the cosmos. She showed us the periodic table and asked us to memorize the elements, and on hot humid afternoons, when she was grading tests or preparing lessons, she turned off the lights and let Carl Sagan demonstrate on TV what would happen if a person rode forward in time on a motor scooter at speeds approaching the speed of light. In the half-darkened science room, where sun streamed in on our backs and made curved, leafy shapes on the television screen, we listened to him say, with his peculiar, rounded enunciation, that when we approached the speed of light, the world would look very odd. Our bodies would compress in the direction of motion, our mass increasing while time on the motor scooter slowed down. On and on the scooter would fly, hurtling through space until the rider alone was young, and the world left behind was a burnt cinder.

Not long after that, Becky Bradham called me after school to inform me that she and everyone else had decided not to talk to me any more because, as they had all agreed, I was acting like Miss America and people were sick and tired of it. Mary Kay and Tamii and Becky no longer wanted me to come to summer camp with them. It was only for Episcopalians. It was a new rule, they said. Only Episcopalians could go to that camp, and I was Mormon.

It was my first experience with shunning, and I can see why the Amish find it a useful tool. Lisa stopped calling me after school to ask what I was going to wear. No one wrote me notes during Physical Science. I would gladly have climbed on a motor scooter and sped forward at the speed of light, leaving everyone and everything to age without me, to feel nothing but my own compression as the earth turned into a black, benighted star.

Instead everything proceeded at its usual pace. The sun rose and set. I stood on the blacktop behind the school until the bell rang, and then I went in. I suppose that I read books, as I always have, to take my mind off it. When people stopped shunning me, though, I took them back. It took years and years to grow up, finish school, meet Tom, and be happy. It would not make a good novel, or a short one, so we invented Audrey Reed, and when Audrey Reed goes into a classroom and a teacher begins to describe the nature of the cosmos, you can be sure that she will pay attention.

Laura and Tom McNeal will be signing books on Saturday, February 11, from 2 to 4 p.m., at The Book Nook, 129 E. Hawthorn Street, Fallbrook.