For at least three decades, the Coal Canyon diamond interchange on the Riverside Freeway through Santa Ana Canyon was a virtual joke, featuring ramps to and from nowhere. "Nowhere" might have been replaced by subdivisions spreading eastward from Yorba Linda and Anaheim Hills. That hasn't happened, and likely will never happen. The Coal Canyon undercrossing, it was discovered, was the one and only practical wildlife corridor between 40,000 acres of undeveloped lands in the Chino and Puente Hills to the north and half a million acres of wild land in the Santa Ana Mountains to the south. Mountain lions were using it to avoid being flattened by an endless river of cars, 10 to 12 lanes wide. Biologists increasingly insist that preserving habitat linkages, even lowly ones such as freeway crossings and tunnels, are essential to the regional survival of migratory wild animals.

Coal Canyon's freeway ramps were closed in 2003. The asphalt strip of the putative parkway underneath is gone, and a wide stretch of Coal Canyon south of the freeway is now friendlier to both migrating creatures and hikers curious enough to visit. Formerly under private ownership, the canyon has fallen under the jurisdiction of Chino Hills State Park and California's Department of Fish and Game. 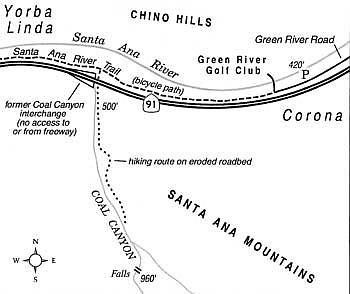 On foot, walk the 0.2 mile stretch along Green River Road toward the golf course entrance, and continue on the paved Santa Ana River bike trail that closely parallels the freeway. Endure for the next few minutes the insanely roaring traffic on your left. Also, take note of the massive damage to the Santa Ana River concrete flood channel on your right, due to near-catastrophic flows of water in recent months. Construction crews will likely be active in this area for several months to come.

When you reach the Coal Canyon crossing after 1.2 miles, walk underneath the overpasses and continue south into Chino Hills State Park territory (signs say no bikes and no dogs allowed). Follow an old, often eroded truck trail up Coal Canyon's wide floodplain, staying to the left of the canyon's sand-and-gravel-coated stream bed.

After a mile of uphill hiking, just short of where the canyon significantly narrows, you'll need to drop down onto the gravelly canyon floor itself. Proceed one-half mile farther upstream, following a silvery strand of water, to where the canyon walls soar and pinch in tightly. There, the sound of spattering water heralds your arrival at a sublime grotto graced with a 20-foot high shower of crystal-clear water. It pours off a mineralized outcrop shaped like the spout of a teapot. This is a rare sight -- but so, too, is this season's overabundance of rain.