Descend from the high desert to low desert on Anza-Borrego's California Riding and Hiking Trail.

The old, never-completed California Riding and Hiking Trail, pieced out of dirt roadways and previously existing trails during the post-World War II years, has never quite disappeared from San Diego County. One branch of this erstwhile trail splits from its main north-south strand in the Cuyamaca Mountains and leads over desert hill and dale toward Borrego Valley. One of the better-maintained sections descends from Ranchita, high on the west rim of the Anza-Borrego Desert, toward Borrego Springs. Treading this narrow pathway, you follow in the prehistoric footsteps of Native Americans, whose seasonal migrations between the winter warmth of the desert and the summer coolness of the mountains made feasible their hunter-gatherer existence. For several decades during the early 20th Century, the same route was used by cattlemen driving herds from the Mesa Grande area near Lake Henshaw to winter and springtime grazing grounds in Borrego Valley.

The somewhat abbreviated five-mile stretch of the trail I describe here is best done as a one-way, downhill hike. Devise a car-shuttle arrangement, or have someone drop you off at the start and later pick you up at the finish. The terrain is rough and rocky, so wear shoes or boots with ankle support.

Start walking at the north end of the Culp Valley Campground, which is found just north of Montezuma Highway (County S-22) between mile markers 9.0 and 9.5. Walk north 0.2 mile along the signed trail to the "Lookout" or vista point on the rim of Culp Valley, and veer right as the west branch of the riding and hiking trail joins from the left. Proceed up and over the nearby rounded hill (elevation 3520 feet) dubbed the Lookout.

Once past the Lookout, you thread your way downward along the undulating stair-step divide separating the shallow drainage of Dry Canyon from the deeper cleft of Hellhole Canyon. The pseudo-chaparral vegetation you saw at first grades into a low-desert type of vegetation -- mostly ocotillo, creosote bush, and brittlebush. When in full bloom this month and next, the brittlebush spreads patches of yellow across the stony slopes. On the clearer days, the near and far views of desert valleys and mountains are consistently stunning all the way down. The last mile of the hike features an unusually steep descent to the desert floor near the mouth of Hellhole Canyon. Turn right as the trail reaches near-level ground, and walk over to the major trailhead/staging area on Montezuma Highway, 0.7 mile south of Palm Canyon Drive, just outside Borrego Springs. 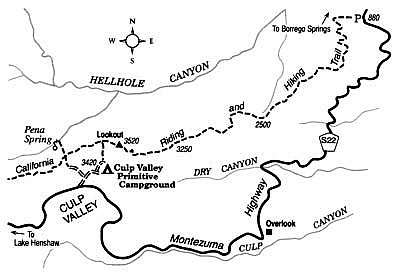