A slap in the face of the past

What in the world is it? Some say it looks like an oversized version of the monolith in Stanley Kubrick's 2001: A Space Odyssey. Some liken it to a modernist mausoleum. It's been created by one of the trendiest New York architects in the realm of high-priced gallery design, whose work includes the Georgia O'Keeffe museum in Santa Fe and the Andy Warhol museum in Pittsburgh. It's stirring plenty of controversy among those who argue that it would deface the historic façade of downtown's Santa Fe Depot. And, though it's being largely paid for by Qualcomm magnate Irwin Jacobs, some critics are already calling it "The Bersin," in honor of what they say is the high-handed way it is being imposed on the city by Union-Tribune publisher David Copley and Bersin's wealthy mother-in-law, Rancho Santa Fe's Pauline Foster. 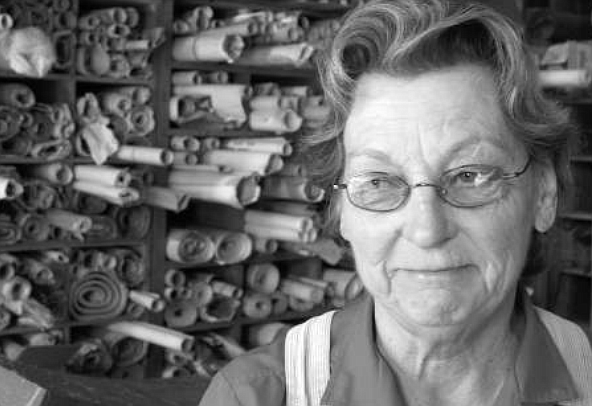 Barbara Winton: "[Foster] got up to speak and said, 'It's so nice to see you all again,' and they all beamed back at her."

The center of the controversy is the proposed downtown satellite headquarters of the Museum of Contemporary Art San Diego, which, despite its name, is a firmly rooted La Jolla institution and a darling of the North County jet set. Two weeks ago, the museum held a dinner at the sprawling La Jolla residential compound of U-T publisher Copley, a longtime museum patron and board member, in honor of Christo, the Bulgarian landscape-wrapping installation artist who is a Copley favorite, and Christo's wife Jeanne-Claude. Copley owns one of the world's largest collections of Christo memorabilia and has put big money into some of the artist's most famous projects, including the 1991 installation of 1370 huge umbrellas in Japan and the Tejon Pass north of Los Angeles. The 67-year-old artist has also wrapped the Reichstag in Berlin.

Santa Fe Depot. Admirers of the depot, though, are less concerned about Copley's menu and his fascination with Christo wraps.

As reported by U-T society writer Burl Stiff, the Copley party, heralding the opening of a Christo exhibit at the museum's Prospect Street headquarters gallery, featured such museum stalwarts and Copley chums as Copley Press attorney Karl ZoBell; Mavourneen O'Connor, twin sister of former San Diego mayor Maureen O'Connor; and former TV reporter Susan Farrell. Museum director Hugh Davies was there, along with Bersin in-law Foster, the museum's president and widow of Stanley Foster, a well-connected real estate developer and local financier. Wrote Stiff: "Copley is a major collector of Christo drawings and the principal underwriter of an exhibition -- 'Christo and Jeanne-Claude in the Vogel Collection' and 'Christo in the David C. Copley Collection.'"

David Copley, Irwin Jacobs, Alan Bersin, Hugh Davies, Victor Vilaplana. Some critics are already calling it "The Bersin," in honor of the way it is being imposed on the city by Union-Tribune publisher David Copley and Bersin's wealthy mother-in-law, Rancho Santa Fe's Pauline Foster.

Added the columnist: "Dinner began with corn chowder and miniature tamales, followed by a grilled filet of beef in puff pastry, and a salad of young greens with toasted goat cheese and walnuts. The dessert was old-fashioned carrot cake with a maple-cream cheese frosting and pineapple ice cream. In informal remarks about the new exhibition, Hugh Davies called attention to a 1963 Christo portrait of Jeanne-Claude, wrapped. David Copley owns it, and has promised it to the museum."

Admirers of the Santa Fe Depot, though, are less concerned about Copley's menu and his fascination with Christo wraps than what they say is the U-T's one-sided coverage of the modern art museum's plans to tear out a large chunk of the 1915 vintage station on Kettner Boulevard and replace it with a three-story futuristic metal cube.

Devoting no coverage to critics of the project, except letters to the editor, the paper has repeatedly rolled out its big guns on behalf of the museum, including columnist Neil Morgan, who in January wrote, "A coming San Diego tourism lure: the Museum of Contemporary Art's plans for its downtown expansion in the old Santa Fe Depot baggage rooms. This can be the kind of showplace that other cities have made from fading depots."

The same month, U-T art critic Robert Pincus wrote, "My wish: that the baggage building of the Santa Fe Depot will become a space for art on a consistent basis.... The museum has already enlisted two architects -- one local (Wayne Donaldson), one New York-based (Richard Gluckman) -- who have a sound record for renovating historic buildings. Could there be a happier fate for this stately structure?"

The month before, the newspaper's architectural critic, Ann Jarmusch, offered what some considered to be a conspicuously tortured rationale for the plans to tack a modernistic cube onto the historic depot. "This proposed reuse of a significant historic structure is a thrilling prospect and a natural fit," she wrote. "To be built of corrugated metal painted the dull red of freight cars and pierced by ribbed-glass or translucent windows, this proposed new building would not visually compete or clash with the historic baggage building or depot.

"Instead, the new building would echo, but never mimic, design elements, proportions and the rhythm of solid and void that flickers across the east and west façades of the depot, baggage building, and the nearest building to the north, the historic McClintock storage building, which houses Rainwater's restaurant."

In September, a story under the byline of art critic Pincus revealed that the depot project would be financed by a $5 million donation from Qualcomm founder Irwin Jacobs and his wife Joan -- along with $4.75 million more from a group of donors including Pauline Foster. "We've traveled with Hugh [Davies] and seen how similar spaces have led to great creativity by artists," Joan Jacobs was quoted as saying. Two weeks ago, continuing the drumbeat, the U-T ran an op-ed interview with museum director Davies, who easily fielded a series of softball questions about the project's aesthetics, posed by the paper's editorial board.

Yet despite the U-T's united front, critics of the project have begun to multiply. First among them is downtown antique dealer Barbara Winton, who is leading a campaign, thus far unsuccessful, to block the deal. She is harshly critical of the roster of wealthy La Jollans behind the proposal and the way in which they have lobbied it through city hall.

"I would say that they have lots more money than knowledge. Just because you can make a lot of money or you inherit it or your husband has made it and you have it doesn't make you knowledgeable," says Winton. "This is an ugly, plain, very modern building that would go next to one of our city's finest historical treasures. I think it's an abortion. As I always say, an elephant in the wrong place is not particularly pretty. It's out of place, it's ugly, and it should be built somewhere else."

Winton is also sharply critical of the New York architect recruited by museum director Davies to design the project and thinks the choice is tinged with more than a touch of trendy East Coast art-world elitism. "They are touting Richard Gluckman as the guru of museum architects. I think he's a lot of hot air. I think if he has said something often enough and long enough, people get convinced of it; he's even convinced of it."

Others note that Davies was responsible for recruiting noted Philadelphia architect Robert Venturi in 1996 to overhaul the museum's La Jolla headquarters, originally designed as a residence by Irving Gill, the region's most famous homegrown architect. The Venturi remodel, hailed by some, drew brickbats from many others, including a reviewer from Art in America, who noted in July 1997 that "Venturi's postmodern playfulness here goes awry in the bombastic and overbearing entry court. Huge Dalmatian spots pattern the terrazzo floor, and an irregular star-shaped clerestory above dangles a wavy, perforated, patterned fin — its edges outlined in neon — from each of its seven ribs."

"My opinion is Gluckman got a nice vacation in Southern California to come defend his building, and if it gets built we will have 20 to 30 years of horror to have to look at. It'll probably take at least that long for us to get it torn down. Once something is up, it's very difficult to get it removed."

Winton was present at an October 16 hearing on the project held by the city's redevelopment arm, the Centre City Development Corporation, which reviewed the plan and gave it a hasty thumbs-up prior to sending it on to the city council, which is now set to hear the item November 26. If the plan is approved by the council, the site would be donated to the city by the depot's owner, real estate giant Catellus, Inc.; the city would then lease the property to the museum until 2091. Winton says the CCDC board made it clear it was on the side of the development and refused to give opponents a fair hearing.

"It was old home week," according to Winton, who says she looked on in chagrin as CCDC board members openly alluded to social and personal relationships they had with museum backers. "You could hear the cash registers jingle. I don't think that it's covert. It's quite overt. They get invited to places, they go to dinners. They are invited to museum welcoming parties. The social scene. This is very important to some people."

One board member, attorney Victor Vilaplana, declared he would recuse himself from voting on the issue, then went on to tell his colleagues about the project's great merits. "Mr. Chair, because of my prior and current relationship with the museum and the museum's counsel, I am going to disqualify myself from the vote for the project, which I do think is a terrific and wonderful cultural and architectural addition to San Diego."

Yet even as they fell into line for a six-to-nothing vote in favor of the building, several members of the CCDC board winced with displeasure over its design. "I support the project, but I have to be a little bit honest. When I look at the building, perhaps I don't have the architectural eye," said member Gil Johnson. "I support this, but I really do have some heartburn."

Chimed in board member Julie Dillon, "I guess I would say ditto to boardmember Johnson. I have had heartburn for quite a while, and everybody's heard me talk about this. I am also not an architect, but I am really concerned about the boxiness of it. I am fully in support of the project, but I am troubled by this building."

Project critic Bruce Coons, executive director of Save Our Heritage Organisation (SOHO), a pro-preservation advocacy group, argues that "The current design looks like the cooling tower of a power plant. This just doesn't make the grade as a great new piece of architecture or historic preservation. The early design has been watered down, and it's just become a boring, ugly appendage. It's an abomination, and almost everybody else agrees. We think San Diego deserves better."

Skeptics say they can't help comparing the situation to the long-standing controversy at the San Diego Unified School District. In that case, Superintendent Alan Bersin, backed by the Union-Tribune and various downtown business interests, along with his mother-in-law Pauline Foster, is pitted against the teachers' union and a variety of other critics of his policies regarding district purchasing, contracting, real estate development, and educational issues. Irwin Jacobs, for whom the depot museum is to be named, also is a major Bersin supporter; in 2000 Jacobs gave $100,000 to an ultimately unsuccessful effort to defeat Bersin's school-board foe, Frances O'Neill Zimmerman.