By the time he became naat, or headman, of the Cupeño and Wilakal tribes, in the 1840s, Antonio Garra had seen half of his people killed by smallpox and other “white diseases.” He watched open country become large, land-grant ranchos and witnessed the exodus of coastal natives into the interior, losing their territories and water rights. Those that remained became “serfs,” often a euphemism for slaves. With the discovery of gold at Sutter’s Mill, Garra also saw his homeland overrun by thousands of American settlers with a lust, in Douglas Monroy’s phrase, for “bonanza capitalism.” 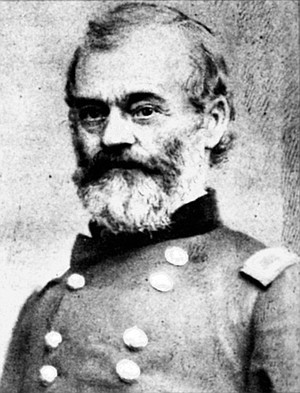 Heintzelman moved most of his troops to Santa Isabel.

The Cupeños lived near Warner’s Ranch. Garra’s tribe of birth, the Quechan, lived at the confluence of the Colorado and Gila Rivers. Between 1848 and 1850, taking the southern route to the gold fields, swarms of gold-fevered American settlers came to this spot. To the natives, they flowed like an endless river from the cast. The Quechans did the ferrying. They charged three fees: one at the east bank, one midroute, another upon arrival.

When George A. Johnson tried to set up a ferry business, the Quechan chief Santiago told him, “The white man and the Indian cannot live together. This is Indian country, white men can go through, rest, and feed his horses…but he can’t live here.”

Hostilities almost broke out. Johnson left the council with his rifle pointed at Santiago. Later, his men dug a trench and built a picket. Phillips: “During the days that followed, they remained continually on guard and kept their howitzer loaded.”

In the summer of 1850, Governor Pete Burnett ordered a state militia, led by Quartermaster Joseph C. Morehead, to subdue the Qucehans. Morehead demanded the 11 natives involved in Lincoln’s ambush be put on trial, plus the money taken from the eight dead Americans. The Quechans attacked, forcing Morehead’s troops to fall back to Johnson’s trench and picket. “A short time later, the force was ordered back to Los Angeles and disbanded. The Morehead Expedition cost the new state of California (admitted to the union in September 1850) $120,000.”

On July 4,1850, to protect the southern route to the goldfields, the United States government ordered Captain Samuel Heintzelman to erect a permanent military garrison on the Colorado River. He built Camp Yuma, overlooking where the ferries crossed. A year later, owing to the high costs of transporting supplies to the outpost, Heintzelman moved most of his troops to Santa Isabel, leaving Lieutenant Thomas VV. Sweeney and ten soldiers to defend the region. They constructed Camp Independence, a stockade six miles south of the Colorado and Gila. Sweeney told a council of chiefs they must “submit to the will of their great Father at Washington.” If they didn’t he “would punish them with the utmost severity, destroy their planting-grounds, and drive them beyond the Colorado towards the rising sun!” There were countless motives for the Garra uprising, though most historians agree on two: hoards of American immigrants coming to California and taxation. Agoston Haraszthy became San Diego County's first sheriff in 1851. Even though the natives didn’t own land or have legal rights, including the right to vote, they did own livestock. Therefore, I Haraszthy concluded, “There is no doubt that the possessions, real and personal, of Christianized Indians, are taxable.”

The sheriff told the ex-neophytes he would confiscate their herds if they wouldn’t pay. Phillips: “Many offered cattle, but Haraszthy was not authorized to receive property in lieu of money.” Leaders of the Temecula, Pala, Potrero, La Joya, and Pauma sent in 19 head for sale. “The money was turned over to the authorities, but did not equal the amount owed. Garra sent his son to San Diego with cash, but it, too, was short of the assessment. Few Americans or Californios in San Diego County realized how deeply the Indians of the region resented being taxed.”

Native American uprisings began with the arrival of Columbus. But most, including those in Alta California, were restricted to a specific tribe or border. In 1851, Garra envisioned a universal revolt. Phillips: “Not accepting Indian political fragmentation to be a permanent condition, he sought to create a powerful alliance that would, through careful and long-range planning, eliminate the Americans from the entire region of southern California.”

Raised as a neophyte at Mission San Luis Rey, Garra could read and write in Spanish. He married a woman from the mission. He impressed even his enemies as “a man of energy, determination, and bravery,” wrote the San Diego Herald, “one of the most outstanding chiefs, his power and influence among the Indians is almost unbounded.”

Feeling overtaxed and overrun, Garra sent couriers to every tribe in San Diego County, including San Pasqual, Santa Isabel, San Luis Rey, and Temecula. At the same time, he also sent runners to tribes in Baja, the Central Valley, and the Colorado River. His message: forget tribal differences; join and subdue the white invaders. He personally visited the “river Indians to the east”—the Quechans, Cocopas, and even the Kamias, who lived on the Colorado Desert and whose chief, Geronimo, became one of Garra’s greatest allies.

For centuries, many of these tribes and lineages battled each other, off and on. Some grudges lasted beyond lifetimes. Thus Garra’s message was revolutionary in two senses: he envisioned a unified force of all natives—heretofore unthinkable—in “a coordinated descent upon all American settlements in southern California... Tulareños were to fall upon Santa Barbara, the Cahuillas and Cupeños to attack Los Angeles, and the Quechans would strike at San Diego,” says Phillips, adding that “only Americans, however, were to be killed.”

Garra had no quarrel with Sonorans or Californios. Some suggest that, since many had been dispossessed of their lands as well, Garra thought Spanish-speaking peoples in California and Mexico would join him in the mother of all wars against Anglos. Successful assaults would bring more to his cause. He would form a “grand confederation,” writes Monroy, to annihilate “avaricious whites” trespassing in “San Bernardino, Los Angeles, and San Diego.”