Like the armored bow of an ice-breaker, flat-topped Point Dume juts into the Pacific Ocean about 20 miles west of Santa Monica. East of the point itself, an unbroken cliff wall shelters a secluded beach from the sights and sounds of the civilized world. Right below this sometimes-narrow stretch of sand, a strip of rocky coastline harbors tidal pools and a mind-boggling array of plant and animal life.

A pleasant excursion anytime the tide is lower than average, this beach walk is doubly rewarding when the ocean level dips to as low as it can get. That circumstance is expected to occur on several days this coming week, when an unusual geometry involving the sun, the moon, and the earth create both extreme high and low tides along the Southern California coastline. Mid-afternoon tides of -1.5 feet or less are expected January 8-11.

Starting out at Westward Beach (open daylight hours -- parking fee charged) on the west side of Point Dume, you have a choice between two routes: The shorter, much easier route (and the only practical alternative during all but extremely low tides) is the trail slanting left up the cliff. On top you'll come to an area popular for sighting gray whales during their southward migration in winter. You'll also discover a state historic monument. Point Dume, you'll learn, was christened by the British naval commander George Vancouver, who sailed by in 1793.

As you stand on Point Dume's apex, note the marked contrast between the lighter sedimentary rock exposed on the cliff faces both east and west and the darker volcanic rock just below. This unusually tough mass of volcanic rock has thus far resisted the onslaught of the ocean swells. After you descend from the apex, metal stairs will take you down to crescent-shaped Dume Cove.

The alternate route is for expert climbers only. During the very lowest tides and assuming there's a flat or gentle surf, it's possible to sneak around the point itself, making your way by hand-and-toe climbing in a couple of spots over huge, angular shards of volcanic rock along the base of the cliffs. Keep an eye out for larger-than-normal waves, and be aware that the rock surfaces in the intertidal zone are extremely slippery. The tidepools hereabouts have some of the best displays of intertidal marine life in Southern California. This visual feast will remain for others to enjoy if you refrain from taking or disturbing in any way the organisms that live there.

The going is definitely easy once you're on Dume Cove's ribbon of sand. You can continue for more than a mile on the sand, eventually reaching Paradise Cove (the nearest road access) after about two miles. 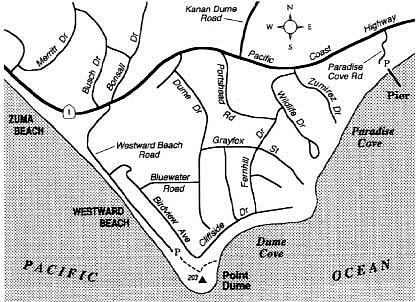