Visit the "Bridge to Nowhere," deep in a roadless section of Angeles National Forest.

Born of snow-fed rivulets, the many tributaries of the East Fork San Gabriel River gather together to form one of the liveliest mountain streams in the San Gabriel Mountains. At a spot called "the Narrows" the water squeezes through the deepest gorge in Southern California. From the bottom of the Narrows, the slope to the east abruptly soars 5200 feet to the summit of Iron Mountain (elevation 8007 feet), and the slope to the west rises without interruption to a ridgeline some 4000 feet higher.

During the 1930s, road-builders managed to push a two-lane highway up along the East Fork stream to as far as the lower portals of the Narrows. There, an arched, concrete bridge was constructed. The bridge was to be a key link in a route that would carry traffic between Azusa in the San Gabriel Valley and the Mojave Desert near Wrightwood. But fate intervened; in 1938 a torrential flood thoroughly demolished most of the road, leaving the intact bridge stranded far upstream. Regarded as a classic case of engineering hubris, the highway proposal will likely never be revived. For one thing, the proposed route now lies in the protected Sheep Mountain Wilderness, a part of Angeles National Forest.

The hike to the "Bridge to Nowhere" is a rite of passage for L.A.-area hikers and attracts occasional San Diegans as well. Exit Interstate 210 in Azusa and drive north through town on the main drag -- Azusa Avenue (Highway 39) -- stopping at the information station north of town to pay the obligatory parking fee for use of the national-forest lands beyond. After ten miles of travel through San Gabriel Canyon, turn right on East Fork Road. Continue another six miles to where the road ends at East Fork Ranger Station. Fill out a wilderness permit at the self-issuing register there, and then hit the trail. You face a nearly ten-mile, round-trip trek up and back along the banks of the East Fork, mostly on dirt roads and patches of old macadam, but sometimes on rocky trails. You'll ford the alder-lined, swiftly flowing stream many times -- which should not be a problem in this year of relatively scant rainfall.

At 2.5 miles into your hike, look for Swan Rock, a patch of metamorphic rock branded with the light-colored imprint of a swan, on a cliff wall to the west. The Bridge to Nowhere appears at 4.8 miles, just as the canyon walls start to pinch in. Recently the bridge, which lies in an island of private property within the national forest, has been used as a platform for bungee-jumping. 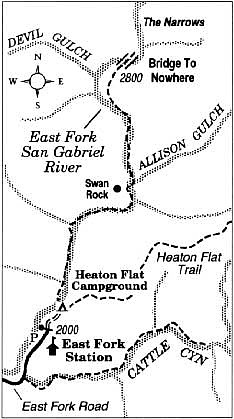